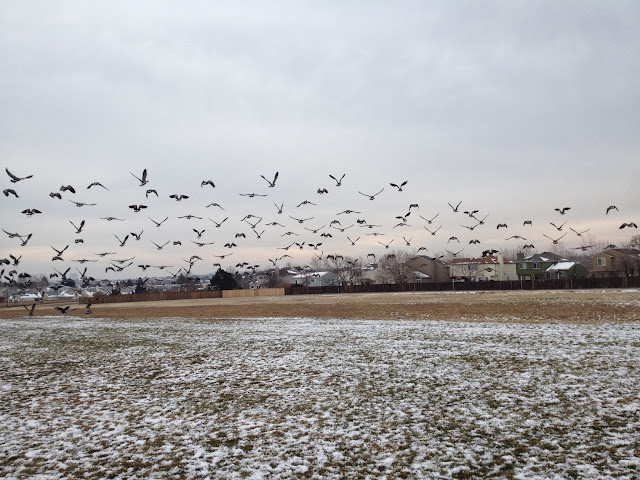 Woke up early, feeling pretty good to go. Looked at the thermometer, it said 22 degrees. I decided to wait. The sky was dark gray and I knew it'd be miserably cold if I went so early. Hung out at home until 8:30, the temps rose all the way to 26, and I realized that if I was planning on waiting until it was comfortable, I wasn't going running. I put a hoodie over my running shirt and decided to head outside.

Usually, I just start from home and go. I felt like getting a different view on my run, so I hopped in the car and went a few miles south to Highlands Ranch. Generally, I find HR to be about the most generic and boring place, but it does have one benefit...it's higher elevation provides great views of the mountains. I was excited, because I was going to get a great picture for the blog. Then as I was driving, I remembered that dark gray clouds mean no good views. So I was stuck in the Ranch, unable to see it's one redeeming quality, and jogging on paved park paths through treeless fields. It was a big bowl of meh.

There was one glorious moment, though. A moment that I have commemorated in the picture above. I saw a field just littered with Canadian geese. There were hundreds of them. I immediately knew that I was going to scare them away, then I thought...I'll do that AND get a picture of it. So, as a 37 year old man, I was running at ducks, and photographing their flight of fear. Yeah, I'm a grown up. Still, there was something darkly satisfying that soothed an itch in the reptilian side of my brain about it. It almost made it worthwhile to run in the Colorado headquarters of The United States of Generica.

Also, I was running in a parking lot, and a Geo Metro almost killed me. It turned violently onto the side street I was minding my own business running on, and the idiot driver practically accelerated and drove towards me. I turned on the afterburners and barely got out of the way. (Fortunate, since my afterburners are not exactly jet fueled.) I'm happy to report, I lived. And since I lived, you get a map... 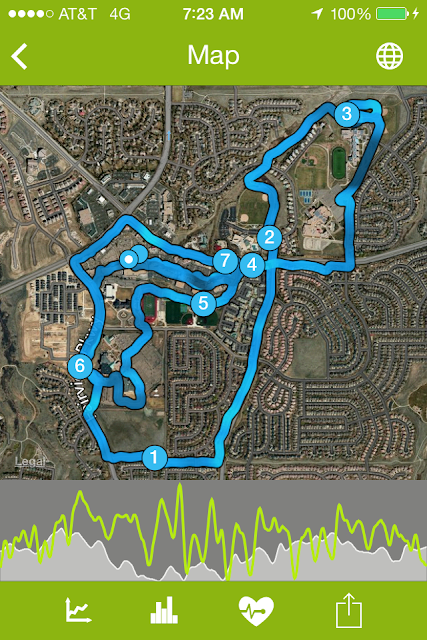