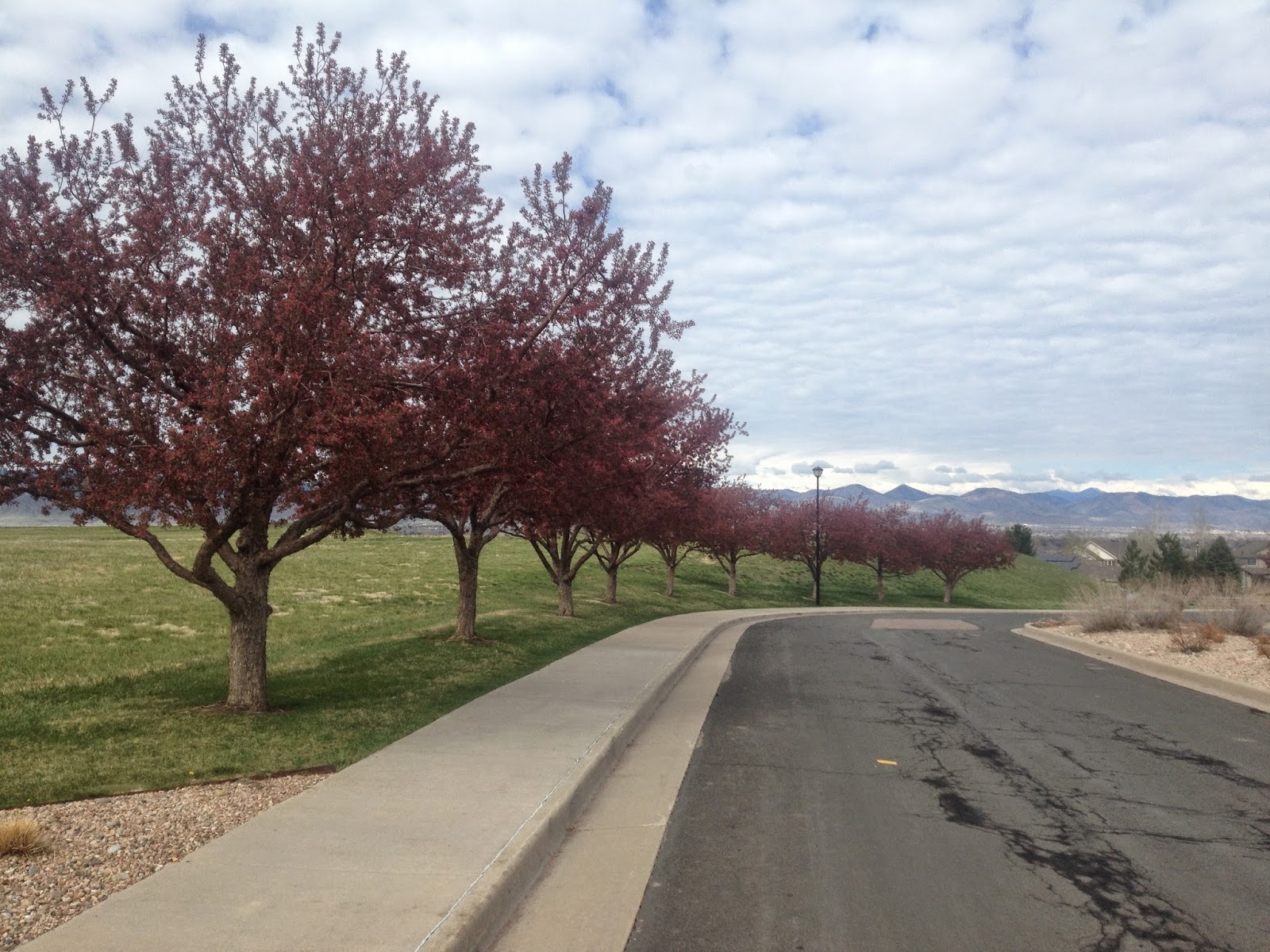 I heart pink trees. It's spring, and everywhere you look there are pink flowers blooming in trees. Unlike those hideous little purple flowers, these trees both look and smell good. They make me feel peaceful, like nothing could be wrong with the world so long as the trees are this beautiful. This run was filthy with beautiful trees. Everywhere I looked, there they were. It made this Easter morning run feel even better. The world felt full and happy and good. I was in a great mood, and unlike Friday afternoon, I had plenty of sleep, so I wasn't dragging. Twas a swell run.

Two funny things from this trip on the trails:

1. I saw an older man, probably in his seventies. He was out with his mutt of a dog, who looked faithful but also like he was just barely putting up with the ridiculousness to which he was being subjected. The old man was pumping and flopping his limbs energetically as if he were moving at a great rate of speed, however, his actual lack of speed was betrayed by his dog who was keeping up with him with what can best be described as disinterested sluggish walking speed. Yep. Although the man looked like he was really moving, his dog was keeping up with him while barely walking. It was amusing, but you gotta hand it to the guy. He may not be able to get moving at much of a rate of speed, but at least he's still pushing himself. I found it humorous and inspiring in equal measures. This guy isn't giving up on life.

2. I was over six miles into this run when I was passed by a woman in her 20's and her dog. Although, I didn't intend to do so, something inside of me decided this was unacceptable. Almost outside of conscious thought, I began to speed up. She never got much further than 15 feet ahead of me, and in about a third of a mile, I passed her up again. As soon as that happened, I realized that she had caused me to increase my speed a lot more than I thought. Although I was getting a bit tired, I was not going to let her pass me again, so I kept pushing myself to an upcoming intersection of large street and trail. I had been planning all along to leave the trail and head down the sidewalk of the major street back to my car, and I hoped against hope that she was going to be crossing the street and continuing on the trail. Thankfully, after about another half mile, we hit the intersection and that exact scenario unfolded. Once she was out of sight, I was able to pause and catch my breath. Pride is such a stupid thing...although on the plus side, it kept me motivated through the toughest portion of the run. So I guess it's not all bad.