Yep. This is a wooden cutout of a girl in a blue bonnet hanging from a 2D swing in someone's front yard. No, you're not alone. I have no idea what is going on, either. It looks super-imposed. I love people and their exceptionally bizarre decorating styles.

Good news: The achilles seems to be just fine. My leg muscles were sore at the end of this run, but thankfully, it doesn't appear that I'm in jeopardy of being on extended leave of absence from running. After missing most of December with a hamstring issue, this made me feel exceptionally good.

I left on this run wearing a pair of Iron-Man earbuds and came back wearing a pair of Skullcandy earbuds plus a gift card to Best Buy for $10.67 in my pocket.. About a month and a half ago, I was out running, and my previous pair of Iron-Man buds just died on me mid-run, and I went back to Best Buy and exchanged them for a new pair of the same thing. Turns out, these ear buds are just crap...it wasn't an isolated incident. Thankfully, Best Buy was very good about replacing them, and in addition to getting a new model from a new company, I was able to cash in with a little extra, as the previous pair cost more than then pair. So...big props to Best Buy customer service, but beware Iron-Man brand ear buds...which one would think would be made for runners, but which, in reality, fall apart in fewer than 60 days.

Finally, the Endomondo app did that weird thing were I can't pull up my normal map, again. So here it is from the Endomono website instead... 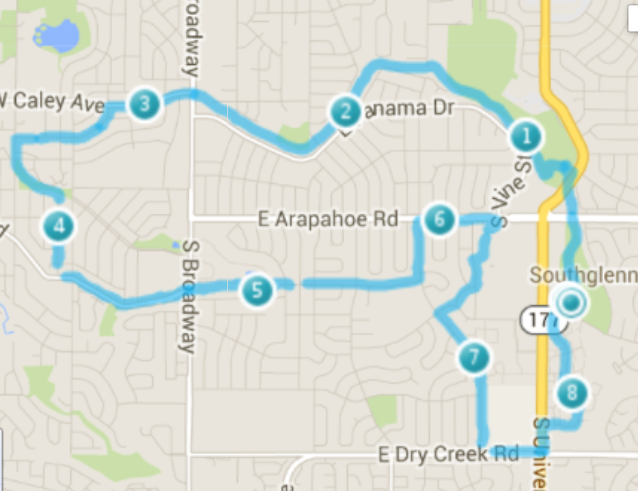