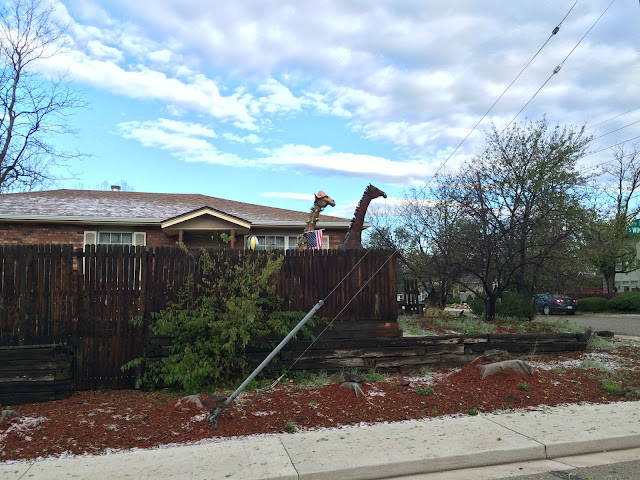 I tend to have more energy and stamina when I have a goal in mind. My goal was provided to me via a run a little over a week ago on which I saw these giraffes just hanging out, being giraffes in this backyard. I immediately knew I needed to get these things for the backyard, because...they are enormous giraffe statues in someone's backyard. This is EXACTLY the kind of thing that this blog exists to chronicle.

That first day, however, there was a party going down in that backyard, and it was a little later in the afternoon, so the lighting wasn't great. I took a few pictures that day, but they came out poorly, so I knew that I'd need to get back here. The problem was, that this spot is a pretty good distance away from my house. I had actually driven to my start point the day I spotted them, but I knew they were within striking distance on a day that I felt good.

As I started out this particular morning, I felt a little stiff (Ever since I fell on May 22nd, I have a rib on my right side that has been killing me, I think I may have cracked or bruised it, and it's painful.), but I also felt pretty strong. The first few miles came at a solid clip, and I was feeling strong, plus I was headed in generally the right direction to get the giraffes, so I decided to push myself a little further than I originally intended on going that morning. I arrived and took a bunch of pictures of the giraffes from all sorts of different angles. They are a little hard to shoot from the street, as the backyard is a bit elevated from the street. The greatest thing would be to get to view them FROM the backyard, but I wasn't feeling so bold as to knock on the door and ask to take pictures of their giraffes. I decided to use a picture from a slight ways away so that the reader could view the giraffes in context, which is always the best way to view a giraffe.

As I ran, I listened through the Twenty One Pilots album "Blurryface" a few times, which is quickly becoming one of my favorite albums of the year. Very solid stuff, and it has a nice bounce that is fun to run along with. Despite being a little slower than I wish (which I blame on my hurt rib), I really couldn't ask for too much more from a run. It was the first super enjoyable run I'd had in awhile. Knowing I had to push myself to get to the giraffes also helped a lot. 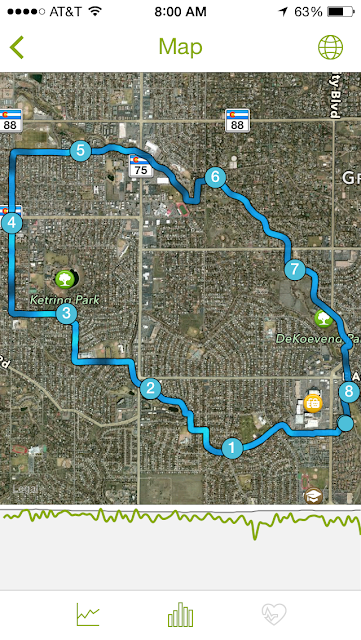