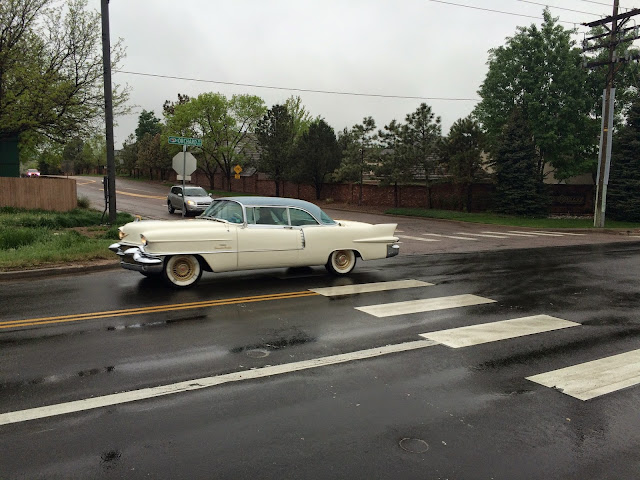 May 8, 2015
6.58 Miles in 1:03:56
Mood: Grumpy and losing it. Desperately seeking sunshine, and then getting myself involved in the weirdest of showdowns.
Soundtrack: The Film Vault

I am nearing the end of my ability to deal with rainy days. For the past two weeks, nearly every day has been some combination of overcast, rainy, and miserable. The clouds parted for half an hour yesterday, and I was confused by what the large bright warm thing in the sky could possibly be. I am a Coloradan. We get over 300 sunny days per year. The sun is our birthright. We don't deal well with extended cloudiness. I am not dealing well. This must stop.

I awoke this morning to find the skies an unwelcome shade of dark gray. "At least it isn't raining." I thought as I ate my breakfast. Then I went outside to begin my Friday run...and something subversive was happening. Although I did not see or feel any rain drops, droplets of water started forming on my glasses. It was very confusing, because I was certain that it wasn't raining, and yet it was raining. I'm seriously beginning to lose it...I'm getting attacked by ninja rain that simultaneously exists and doesn't exist. Up is down, down is up, cats and dogs living together...and falling routinely in Denver. Denver is Seattle. I am not a fan.

As I ran through the rainstorm that both was and wasn't I found myself in a progressively worse mood. I was seriously grumpy this morning. I tried to fight off the negative emotions, but I was irritated by getting wet. My socks were soggy, my feet were cold, and then as I stopped on the side of the road to rest and check something on my phone...the moment that both peaked my annoyance and also made me laugh.

I was stopped on a street corner near a crosswalk, but I was giving no indication of imminent crossing. My back was turned to the crosswalk and I was checking the camera app on my phone when I felt the stare. I turned to find a car paused in the street and the driver staring at me in irritation. He must have stared at me for ten seconds, no exaggeration. Then he did the dismissive and annoyed hand wave trying to usher me across the street. I was eventually going to cross in the direction he indicated, but I wanted to do so on my own timing, and was not going to be bullied across the street before I was ready by a passive-aggressive weirdo in a car who was ignoring my very purposeful body language designed to make all cars realize that they did not need to stop for me. After his little hand wave, no force on earth was going to get me moving before him. He looked at me for another two seconds or so, at which point irritated me made a very similar and very over dramatic hand motion to him letting him know that he should probably get on his way.

Thankfully, this pedantic gentleman finally took a hint and hit the accelerator. I laughed at the sublime ridiculousness of it all, finished up with my phone, and crossed the street about 20 seconds later. Seriously, who is that insistent on a pedestrian maintaining the right of way...whether said pedestrian wants it or not?? It was weird. Which brings us to our picture for today...Amazingly, I took a photo of this intersection about ten seconds before this all went down. Sadly, I didn't get a photo of my weird friend, but the intersection and crosswalk pictured above is exactly where all this silly action went down. I only took the photo because of the cool car driving by, but I also inadvertently captured the scene of a very strange showdown that was just about to take place. The only reason I had stopped was to see if I had gotten a decent picture of this cool old car, and my delay in checking this picture is what caused the bizarre stare down.

The interaction initially made me more annoyed at the soggy morning, but the more I thought about it, the funnier it seemed until ironically it became the best thing that happened on this rather forgettable and sloppy morning run. Funny how life works out that way sometimes. 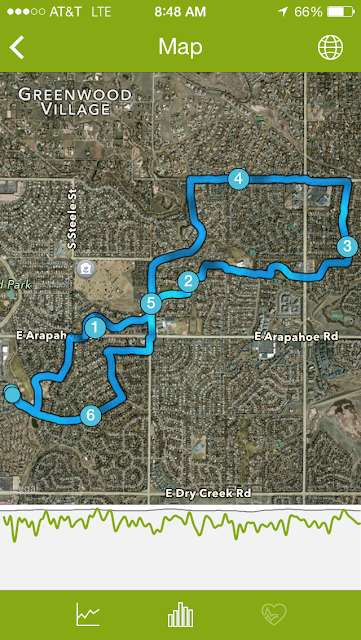