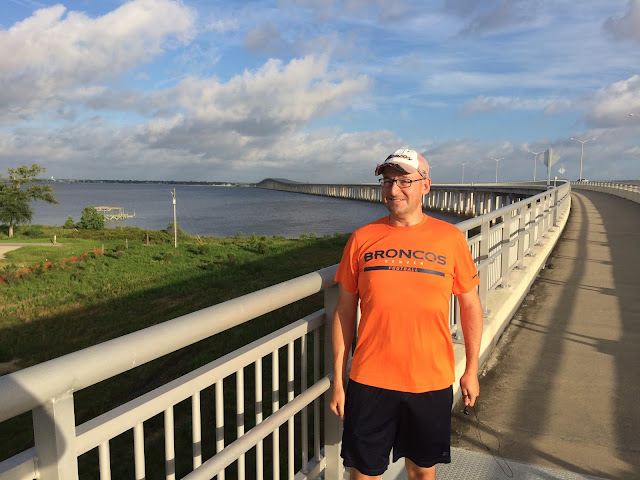 June 15, 2015
8.26 Miles in 1:19:43
Mood: Bridge hopping and understanding the importance of hydration
Soundtrack: Stelth Ulvang "And, As Always; The Infinite Cosmos" / TV on the Radio "Dear Science"

Mississippi, while still oppressively hot, was at least a more visually fun place to run. We were staying in a beach house in Pass Christian, Mississippi, and my brother-in-law Jeff and I decided to run over the 2.1 mile bridge that links Pass Christian with Bay Saint Louis. He doesn't run quite as much as I do, but he was interested in running the bridge with me, so we drove to the base of the bridge and headed out. Jeff took this picture of me just before we headed out, which explains why I am not drenched in sweat, because in the extreme humidity it takes about a quarter mile to get completely drenched in sweat.

I had a hard time believing that the bridge was over two miles long, as driving over it felt very quick. Running it was a different story, as there was a lot of heat and much less breeze than we were hoping for, I quickly came to believe that it was every bit of 2.1 miles. I noticed on the way back that there were mile markers on the pedestrian bridge every tenth of a mile, and each post had a different design on them. Some had pelicans, some had jellyfish, some had mermaids...there were all manner of different cool designs, and I appreciated the artistic touch.

Jeff bowed out at just shy of the four mile mark, so I finished the last bit of bridge by myself, and then continued on down the beach, as I felt pretty strong and was determined to get in a nice long run. The beach had a bit of a breeze, which although it was warm, was quite welcome. I made it a little over six miles before stopping at a convenience store where I purchased two bottles of water which I quickly guzzled. This hydration made an enormous difference, as the final two miles were much easier than the previous few had been. I ended up back at the house with over eight miles behind me, and felt about ten times more positively about Mississippi than Louisiana. I also realized I had increased my total of states run in for RunShoot.us to 9 (Colorado, Kansas, Washington, South Dakota, Illinois, Arizona, New Mexico, Louisiana, and Mississippi.) It may be awhile before I get to double digits, as I have no plans to leave Colorado in the immediate future. 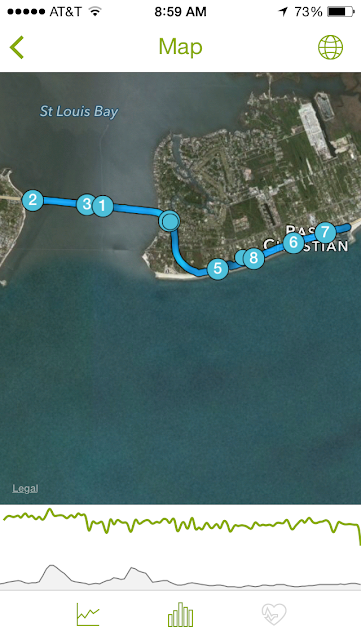