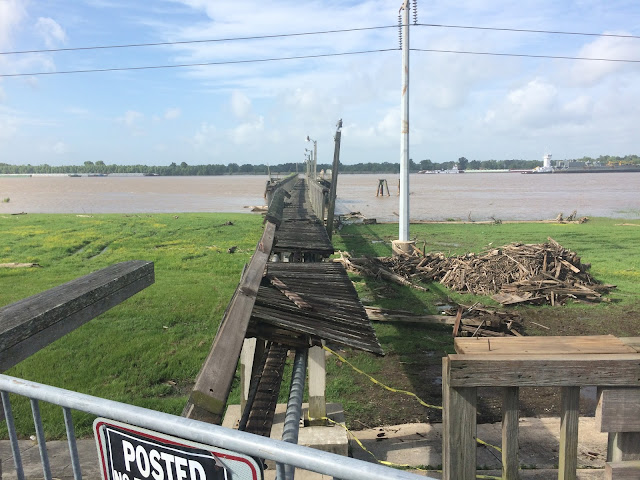 I almost didn't run in Louisiana. My wife mentioned that some parts of New Orleans have the highest murder rates in the country, and I was completely ignorant of the safety of the neighborhood surrounding the airport in which I found myself.

I eventually hit the road because I figured most murders probably don't happen early in the morning and I also realized this would be my only chance to run in the state. Plus I needed all the miles I could get to reach 100 miles in June prior to leaving for camp on June 28th.

The neighborhoods didn't seem great, but I never felt like I was in danger. I noticed on the map that I was less than a mile north of the Mississippi River, so I decided to angle in that direction and run along the river. When I arrived at the river, I was shocked. The mighty Mississippi that I have heard about my whole life looked practically dried up, and no bigger in width than the Highline Canal has looked lately with flooding in Colorado. About two minutes later, I had run along the river path a bit, and I realized that the actual river was behind trees and what I thought was a river was just a bit of extra river that had settled into a culvert adjacent to the Mississippi. The actual river was enormous, and much more like what I picture when I think "Mississippi River". I felt pretty dumb that I had believed that it could be so dried up and tiny.

I saw some crazy things on this run that reaffirmed all the preconceived notions of the South. I saw a dead raccoon lying in the middle of the road, and it was impossible to tell just how long it had been there. It appeared to have died of natural causes, as there were not tire marks suggesting it was run over. I saw several buildings that looked completely devastated...and I couldn't tell if the devastation was from Hurricane Katrina ten years ago or just general dilapidation run amok. I encountered a convenience store with a sign announcing that it would be closed at midday and sundown for a short ten minute break...this same store was locked up despite it being 9:40 in the morning...pretty sure it wasn't midday or sundown. I saw a cement building with spray painted baby Disney characters on it surrounded by barbed wire. I saw a sign which proclaimed, "Anything Wood - Whatever your mind desires - I can create" which seemed bold. I also saw a myriad of homes surrounded by broken down cars, piles of scrap wood, and general debris. Mostly, I saw an exceptionally unbeautiful city. Kenner, Louisiana is probably not something that needs to be on your short list of places to see.

The picture I chose for this run is a pier which is in shambles stretching haphazardly into the Mississippi River. I passed by this place twice, and by the second time I was more walking than running because of the heat and humidity. I was on a fairly decent path next to the river, and I didn't see a single other runner and only a few walkers and a few bike riders. It was a pretty desolate exercise experience when compared with something like running in Wash Park. You could absolutely feel the reason that the South is renowned for being unfit...exercising in this oppressive weather is really hard. 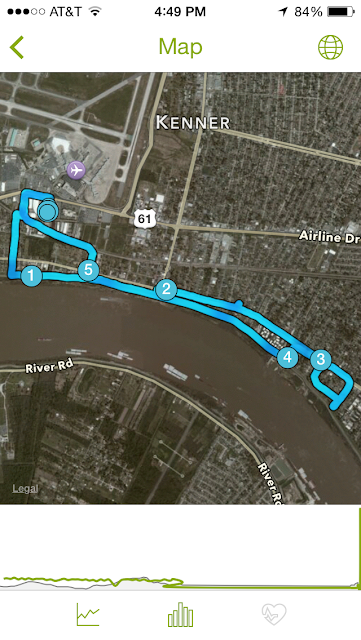