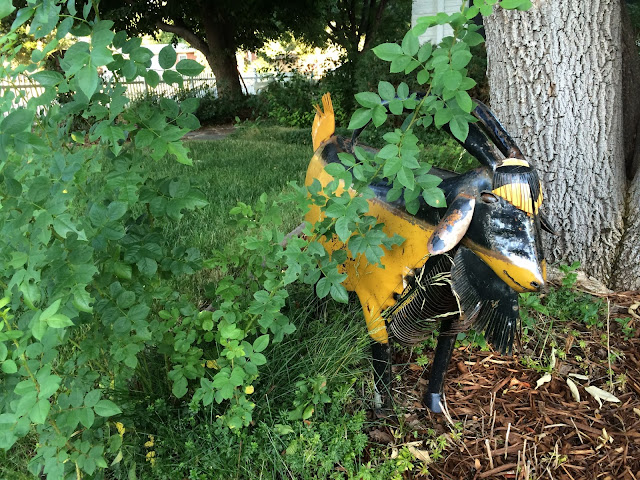 If you look closely at the photo above, you might see a goat. I walked into a front yard that was surrounded by a white picket fence to get this photo, so I hope you enjoy it.

This was a slow run. For good portions of the expedition, it was more of a walk than a run. Yet somehow, the sixth mile was run in under 9 minutes, which was quite surprising. My legs felt like cinder blocks. In fact, in the home stretch of this run due to my heavy legs, I actually tripped over a speed bump and tumbled to the ground. My second such fall in the past two weeks. I'm not too much worse for wear as a result, my hand got a few tiny scrapes, but mostly just my pride was hurt. Although seriously, two falls in less than two weeks? That is ridiculous.

My favorite moment of this run happened when I was right next to the Littleton Farm Museum. I saw two squirrels engaged in what looked like a territory dispute. It was either that, or one of the squirrels was trying to romance the other. Who can tell with squirrels? They kept jumping on each other and then trying to climb a tree. I walked over and took a video, at which point both squirrels forgot about each other, perched about two feet up the tree, and cautiously stared at me in bewilderment. They weren't sure if they should run or pose, and it was pretty hilarious. One of them started twirling his tail in circles like the rotors of an outboard motor. I was amused.