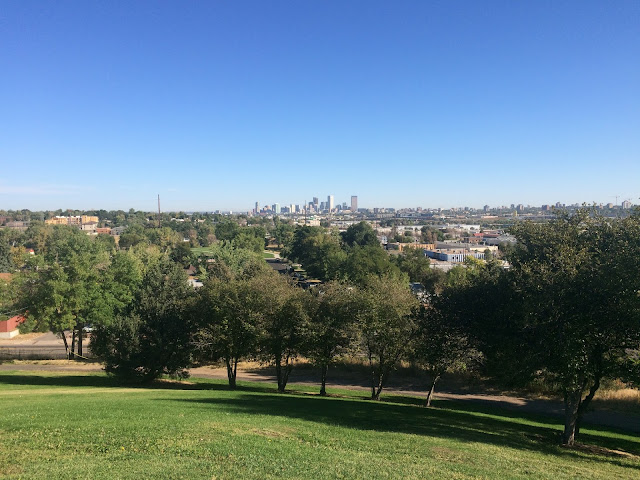 September 27, 2015
7.63 Miles in 1:10:56
Mood: Exploring Ruby Hill and getting directions from unexpected sources.
Soundtrack: Family and Friends "XOXO" and "Love You Mean It"

I've only recently started to discover how centralized Wash Park actually is. I was looking at a map on Sunday morning trying to decide where I should run, and I realized that it Ruby Hill Park is only two and a half miles from Wash Park. I would have guessed that it was ten miles away, but apparently I'm bad at knowing how far apart things are.

Turns out that Ruby Hill is not just a clever name. There is a somewhat severe elevation gain which made for about seven minutes of painful uphill running, but ended with this excellent view of Downtown Denver as seen here. Not only did I get a great view, but also I found a cool playground with a dragon, so double bonus for me. I don't have a lot of experience with Ruby Hill Park, but it seemed like a pretty swell place on a Sunday morning.

The oddest interaction from this run came when I was on my way to Ruby Hill and I was looking for the Platte River Trail to take south on my way there. I had just passed Santa Fe Boulevard and crossed a bridge over the river, and I was anticipating that I would quickly find the trail, but it was a bit more hidden than I was expecting. A homeless man was standing on the street at the corner of Santa Fe and Mississippi holding an "Anything Helps" sign in the direction of oncoming traffic. This man waved me down and very graciously directed me in the right direction. I felt like he had two missions in life on that corner, the first of course is to obtain dollars from passing motorists, but the second seemed just as important to him and that was directing runners to a trail. It seemed like he does this so often that it's part of his job description. ( With a tiny bit more thought, I'm guessing that panhandlers don't really have job descriptions.) Either way, a big salute to the very helpful homeless man. 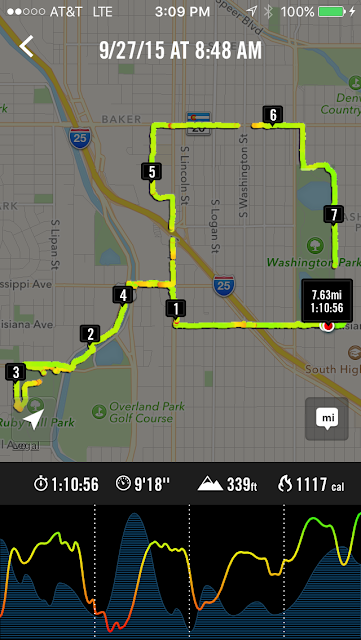