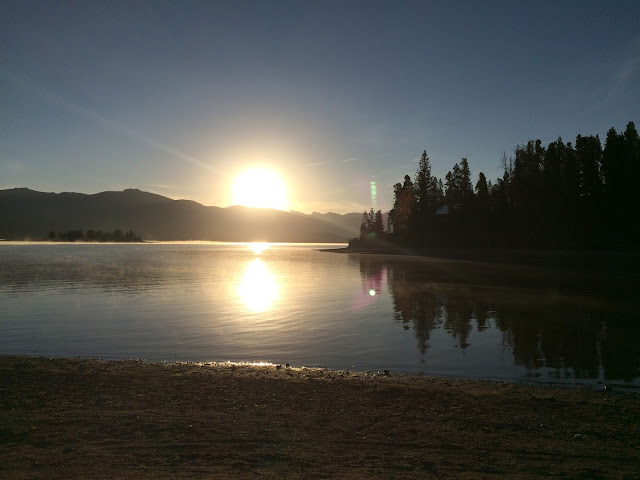 Running on vacation is quickly becoming one of my favorite parts of going on vacation. Yes, it requires getting up at an unholy time in the morning rather than sleeping in...and the extra sleep is a lovely part of vacationing, but that time alone exploring places that you've never seen before is pretty great.

We were in Grand Lake, staying with the father of one of our good friends. His home was located on the north end of Lake Granby, and I was hoping that I'd find a great trail running along the lake. Great trails do not appear to be a big priority in this particular mountain community, however, so I quickly found myself jogging along the shoulder of Highway 34. Although this might have seemed like a bummer, it tracked near enough to the shore that I was afforded some spectacular views.

The sun was rising as I ran, and seeing it come up over the mountains above the lake was truly breathtaking. It felt like God was putting on a show just for me, as there was NO ONE else awake at seven in the morning on a Saturday. I only encountered one other person walking their dog on the final mile of my run, apart from that it was a very solitary experience. That said, it was amazing. My speed wasn't terribly fast, but I was enjoying every step and just taking in the sights and sounds of a place that I had never before been. It was excellent.

The only downside was that for the first thirty minutes before the sun peaked over the mountains it was exceptionally cold. I was strongly regretting not wearing gloves during that opening stretch, but then the sun came up and suddenly everything was groovy. The photo above was taken right before I turned around to head back in the direction from which I came, and even though it came out quite well, the iPhone still did a poor job trying to capture the beauty. It was such a great morning to be alive. 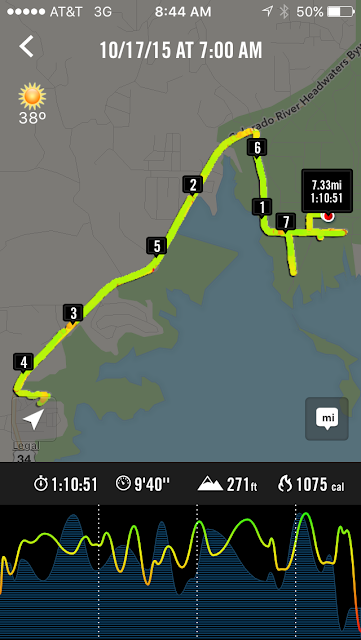