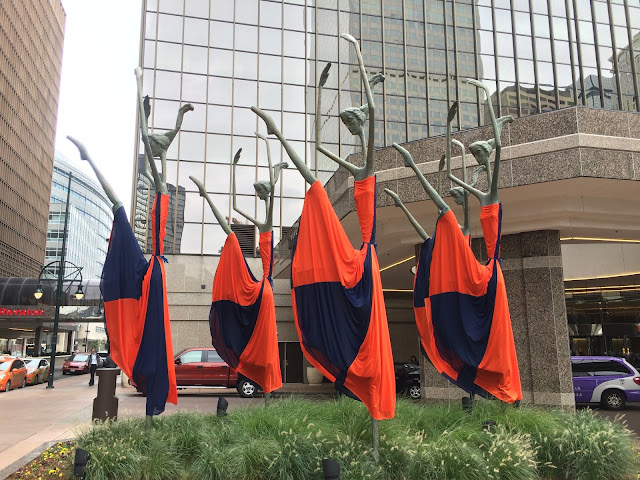 I haven't run to Sports Authority Field on a Game Day since the playoff game in January against the Colts that ended the Broncos season. Since I am not a superstitious person, I believed that no harm could come of such an endeavor even though it ended badly last time. So I started out from Cheesman park with the stadium in mind as my destination.

It was a glorious morning, and I was well rested and felt super human. I was running at a very solid (for me) clip, and wasn't getting tired in the least. It was one of those rare occasions where I felt so strong, it seemed like I could run forever. I stopped when I reached 9 miles because I had arrived back at my car and needed to get home, but it did seem like I had another 4 or 5 miles in me if I wanted to extend the excursion. Such a great run.

During this trip, I did arrive at the stadium to find a large contingent of fans (including a surprisingly large number of purple clad Vikings fans) milling around the stadium. The gates wouldn't open for about an hour, yet people were already there at 10:30 in the morning for a 2:25 kickoff. I have no idea what you do for four hours to get ready for a game, but these people were doing it. Mostly it appears that you take selfies with the stadium.

After circling the stadium fall of Jericho style, I headed towards downtown so I could run the 16th Street mall on my return trip. As I passed by the Downtown Denver Sheraton, I noticed that the ballerina statues in front had been decked out with Bronco colored dresses, which was quite awesome. All in all, by the time I made it back to the car, I felt I had appropriately pre-gamed and that the Broncos were now ready to go out and play football thanks to my running exploits. No clue why I feel that a good run equals good prep for my favorite football team, but it does. Turns out they beat the Vikings, so I guess I wasn't wrong. If only all runs could be as great as this one. 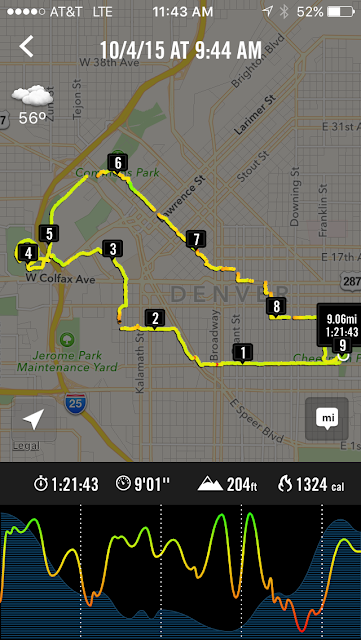