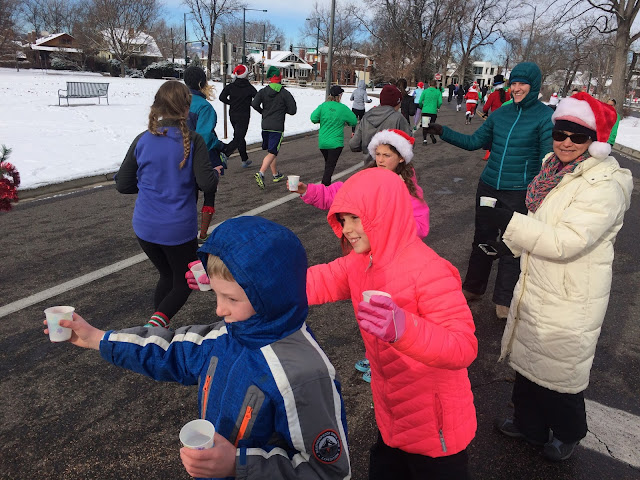 It's rare that I get to involve my entire family in a picture while on a run, but it happened! My kiddos are involved in a "Kids Who Care" club, and yesterday they volunteered to pass out water for participants in the 2015 Jingle Bell Run/Walk. The run was taking place at Wash Park, so I decided to run (although not IN the official run) at Wash Park. I knew where they would be, so I ran over to their water station during the middle of my run to say hello, get hugs, take a cup of water, and snap a quick picture.

They both said that they really enjoyed being involved in the run, and it was cute to see them passing out water. The water seemed almost unnecessary, as it was a chilly December day, but when you've been running, even at frozen temperatures, water can be nice. I started my run about thirty minutes before the official start of the race, and I was a little worried that people were going to slip and die, as the streets in the park were less like a running surface and more like a skating rink. I ran along the outside edge of the park where I was running in packed snow that was much less slick. Fortunately, the weather warmed up a tiny bit before the race started, and the ground looked much more stable for the participants than it had when I tried briefly to run on the icy paved road about 30 minutes earlier.