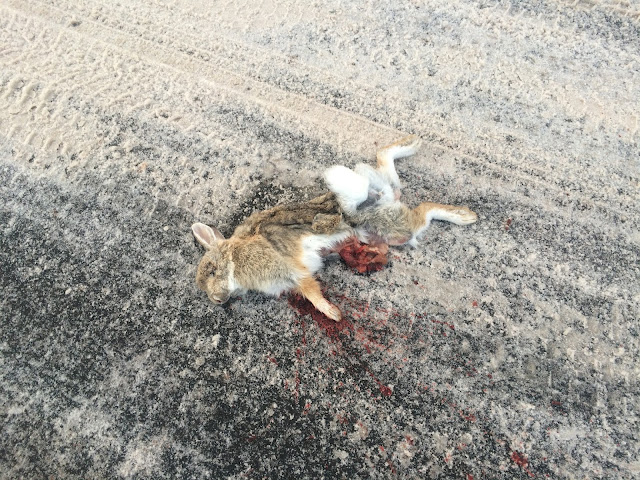 Look, I get that this is a weird photo to use. I had others that are more pleasant and holiday appropriate and benign, but nothing that has quite the impact of this photo. I see a lot of beautiful things on my runs, and you might think than a roadkill rabbit is not in that category, but something about this picture tells a story. It brings questions to me about the randomness and violence that can happen in life...apart from any malice, as I doubt there was any hatred in heart of the driver of the car that killed this rodent. It just happened, and it was an accident, and it was awful, but it also has a certain beauty in it if you're willing to see it. It's a cold beauty, far from the Disney-fied view of nature and animals and the world that often permeates this culture, but it's interesting. At least to me. I find roadkill fascinating. I don't long to see it, but when I do, I can't look away.

As for today's run, it was really really cold. The foot of snow that dumped on the city on Tuesday has remained basically unmelted as we have been living in an arctic blast of cold ever since with temps hovering in the teens at their highest. The resulting terrain was heavy with snow. The issue with it isn't so much that it's slippery (although at times it was definitely slick) as that it's just deep. Even running on streets there are times where it feels like you're running through sand. Plowing through all this snow kills my speeds, the only time I ran a mile in less than 10 minutes was the final mile when I was running in the heavily shoveled Streets at Southglenn. Still, there was something nice about getting out and braving the elements to get my miles in. I felt good about this run despite it's slow pace, because it felt like I had survived something. It's the kind of pride that comes from accomplishing something hard and at times painful. I was very glad I trudged through the winter wonderland today, there was a certain beauty in it. That said, I hope it all melts and the temps raise about 40 degrees sooner rather than later. At least we're almost to the point where days are going to start getting longer again. Winter is a bummer. 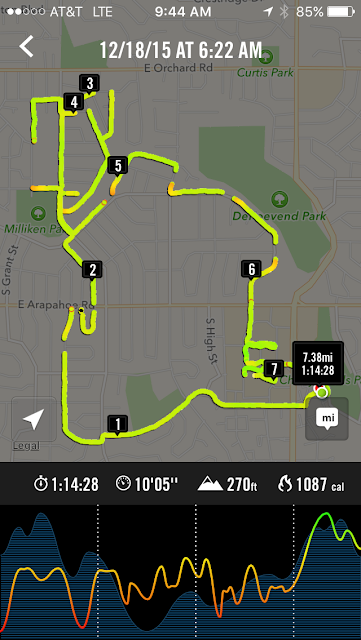