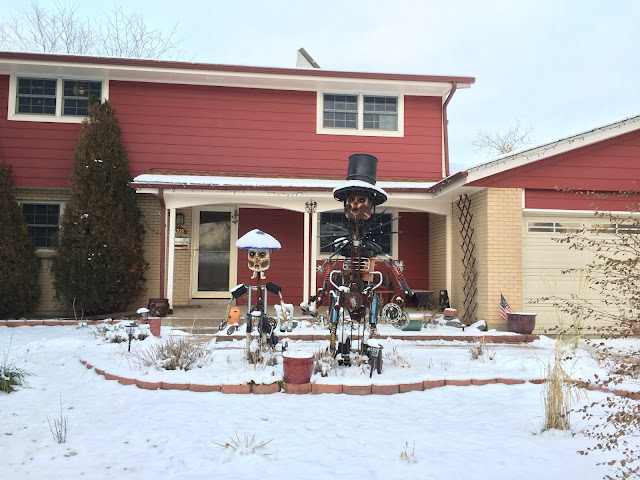 Winter has hit, and with temps hovering in the teens and several snow storms hitting recently, I haven't been able to run as much as I would prefer. It was Saturday after Thanksgiving, and I hadn't run since Wednesday, and I was sitting in a house full of family that I love and yet I could tell I was super grumpy and needed to go running. I fought it for awhile, but with some encouragement by people who probably also realized that I needed a release, I headed out into the chilly winter afternoon to log a few miles.

Afternoon runs are a rarity for me anymore, and the odd feeling of the world getting darker and colder as I progress instead of warmer and brighter feels exceptionally odd. Even though I know intellectually that this is how the sun works in the PM, it still felt weird. I headed directly towards the odd steampunk robot statues that I have passed on my last few runs to get a picture of them with the afternoon sun, as I thought they might look better than they have in the pictures that I have tried to take of them in the morning. They did look better, but I was still slightly disappointed in how much cooler they look in person compared to taking a photo. It's hard to get a feel for the proportion of these works of art in a picture. The Abraham Lincoln hat one is probably eight feet tall, and they look very imposing as you approach them on the street, yet in a picture, they look more contained and smallish.

After getting a photo of my desired subject, the rest of the run was pretty smooth, as I tried to squeeze in enough miles before I lost the light. I pushed it a little harder than normal, because it was cold and getting colder, but when I arrived home, I was none the worse for wear, and felt pretty good that I had actually got in some miles. I was in a much better mood for the rest of the night. 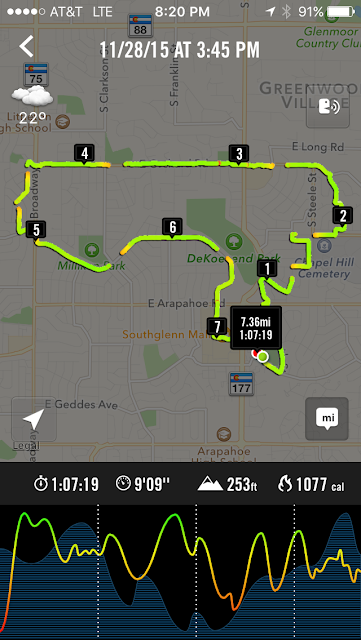