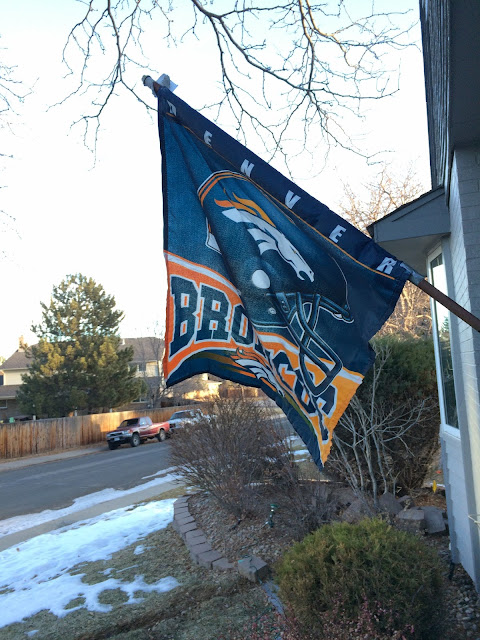 The Broncos are headed to the Super Bowl for the second time in the past three seasons. Two years ago, this town lost it's mind and was gung ho about the team's chances and went all in emotionally. Denver was nuts two years ago, and then the Broncos went out and lost 43-8.

It's too early to be able to tell for sure, but I'm wondering if people are scarred by that fiasco to the point that they are holding back from investing emotionally this go around. It seems like even the Broncos are even a little weird about it, deciding to wear their white uniforms instead of their typical orange home jerseys when they had a choice. It's a strange vibe 10 days out. Excited, but also a little apprehensive. We'll see how it revs up as we get closer next week.

As for the relevance of Bronco fan enthusiasm as related to this run, I bring it up only to say that I'm finding fewer examples of fandom than I did two years ago. There are definitely more flags out than usual, and I've seen a lot of people walking around town in orange gear, but everywhere I turned two years ago I was bumping into orange and blue paraphernalia, and I'm thus far not finding that to be quite as common this go around. I did find this cool banner today, and walked up to the front door of the house where it was hanging and untwisted it a bit so I could get a better picture of it.

I'm pumped about the Broncos, and it will take something rather unusual to trump orange and blue photos being posted for the next few runs in the lead up to Super Bowl 50, as I am actively seeking Bronco items. Just doing my part.

As for today's run, I followed an unusual route, ended up on several streets I've never traversed, and in general had a nice time, if only slightly disappointed by an underwhelming lack of Broncomania. 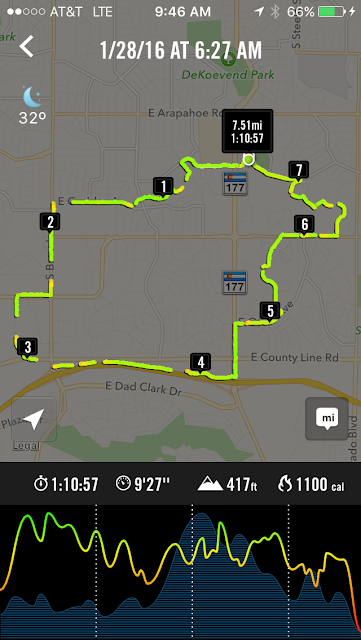