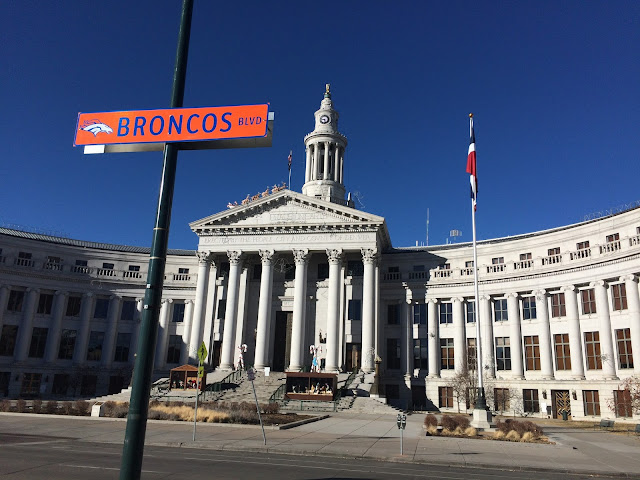 It was AFC Championship Game Sunday, and I figured running downtown and circling the stadium had worked so well for the divisional round of the playoffs that I'd run a very similar route to see if the same pregame ritual that led to a win for my Broncos over the Steelers would also work with the Patriots in town. Turns out, it did! The Broncos squeaked out a 20-18 win later that afternoon. (Although, for the record, I do not believe that the fact that I ran past the stadium in the same manner as last week had a single thing to do with the Broncos winning again. I'm not superstitious like that.)

While running, I saw a bunch of Patriots fans prepping to head to the stadium for the game. I encountered a much higher number of Pats fans than I saw Steelers fans the a week prior. One guy was walking down 14th Street in Patriot gear, and I jokingly gave him the, "Worst of Luck, today!" message. We ended up talking football in a very friendly manner for about five minutes. That guy was awesome. Then I got stuck behind a few Patriots bros as I got a bit closer to the stadium. I heard them actively discussing whether they thought it would be harder for the Patriots to face the Panthers or the Cardinals in two weeks at the Super Bowl. They were actively assuming that they had already beaten the Broncos as if it were a given. I didn't like those guys as well.

I also listened to the Bill Simmons Podcast for a good portion of my run. He's a huge Patriots fan, and he sounded quite confident in his team's chances. (Although not as confident as the Patriots bros) I was trying my best to temper my enthusiasm a bit and also settle my nerves on this run, as I was really hoping the Broncos would make the Super Bowl, but I also thought there was a very good chance that they wouldn't win and I didn't want to get my hopes TOO high. This trip was excellent for running off my nervous energy. I was pumped and perfectly prepped for the football game to get underway by the time I got home.

Today's photo comes direct from Civic Center Park. It shows the Denver City and County Building which still has a lot of Christmas decorations up, including the very cheeky Santa on the rooftop. More important to the day's proceedings was the sign temporarily declaring the street in front of this large government building as "Broncos Boulevard". I took a picture of this sign the previous week, and almost used it for the post a week ago before settling on the picture of a seahorse wearing a Von Miller jersey. This week, it was by far my favorite picture, so it made the blog. More importantly, the Broncos have once again made the Super Bowl!!!! So, for the second time in the history of this blog, my Broncos are in the Super Bowl. Once again, I'll be looking for signs of growing Broncomania enveloping this city. I am certain this will happen once again, so look forward to the next two weeks of orange and blue themed photos...as they are undoubtedly coming if I know me.