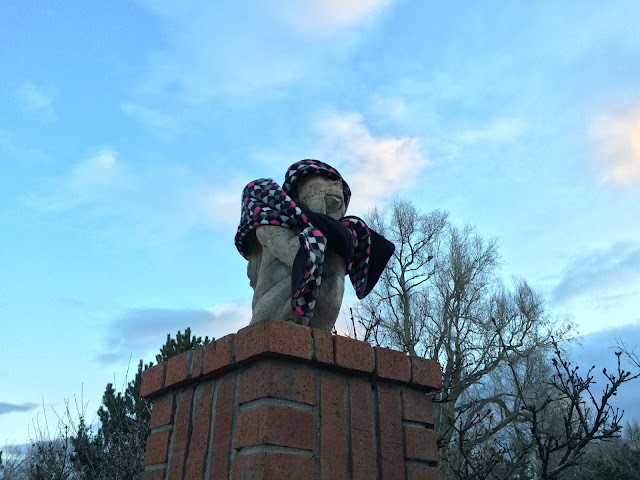 I started out this morning with a general idea of trying to go faster than I have gone lately. I was intentionally trying to push myself, and half a mile in, I had to stop and rest because the faster pace was hurting. So I walked for a short bit, and then resumed trying to go fast. I ended up doing this walking and then trying to push myself thing for a good majority of the morning. I ended up clocking in at averaging 9:02 per mile, which is faster than I've been lately by a decent margin. I had to break it up with a few decently long walks, but all in all, I felt really good about this morning's effort.

I also had to stop in on my old friends, the Belleview Gargoyles. Today, they were decked out in winter wear just trying to keep warm, which felt appropriate for January. I was a little disappointed that they weren't in orange and blue to support the Broncos in their upcoming AFC Championship tilt, but it still was good to see that they continue to get decked out in seasonally appropriate gear. It is my great fear that one day I'll run by, and the wonderfully wacky person who dresses them up will have sold the house, and they'll just be naked. That would make me sad.

Speaking of sad, I had a short bout of intense melancholy about two miles from the end of my run when I passed by a Lost Dog sign someone had lovingly posted on a street lamp. It was a cute little Yorkie dressed up in a red coat, and then sign desperately pleaded for someone to call if they had any information about this little guy named "Bentley". I have a Yorkie to which I'm quite attached, and Bentley looked adorable, so to know what that poor family must be going through not knowing what has happened to their beloved pet really wrecked me. Here's hoping you get found, Bentley! 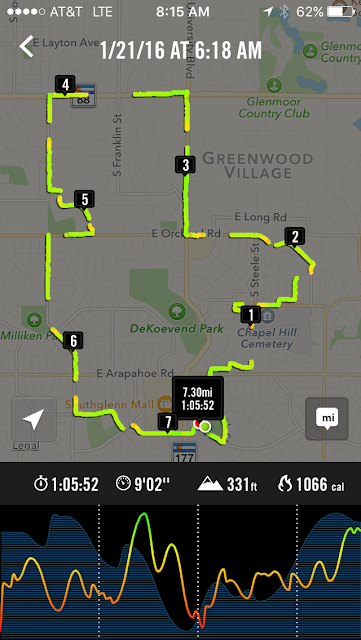