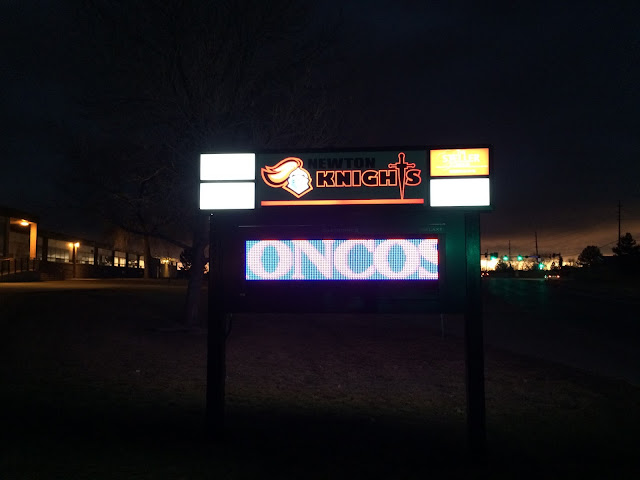 The Bronco momentum is building. Our local modern rock station is branded as "Channel 93.3". However, this week it has been renamed "Orange 93.3", which is undeniably awesome. I saw a bunch of orange and blue flags, yard signs, and banners this morning, but the the thing that almost singlehandedly got me out of bed this morning was the fact that I knew Newton Middle School had a "Go Broncos" scroll streaming across it's new digital sign. I literally might have slept in later  and skipped out on running this morning had I not known that this was a thing. I wanted to get a picture of it as soon as possible on the off chance it disappeared prior to the Super Bowl.

The photo above is that Middle School sign with the dawn springing up just behind it. Taking a picture of the "Go Broncos" scroll is difficult because the letters are too large to all be on screen at once and the lights get washed out in a picture, but it is a bright blue and orange when you see it in person, and I love it.

The temps were already above 40 before I even left home this morning, so I abandoned my usual winter running hoodie and went just in a long sleeved running shirt. The wind was a little intense, but nothing unbearable. For the second straight Friday, I took it a little easy with several long walking breaks. I felt okay running, but I was mostly in the mood to enjoy the lovely morning and wasn't pushing too hard. My eyes were scanning everywhere for signs of orange, and sometimes you need to do that while moving a bit more slowly. Also, my legs were a bit shot after yesterday's solid run, so this was a light and easy outing, but still quite enjoyable. 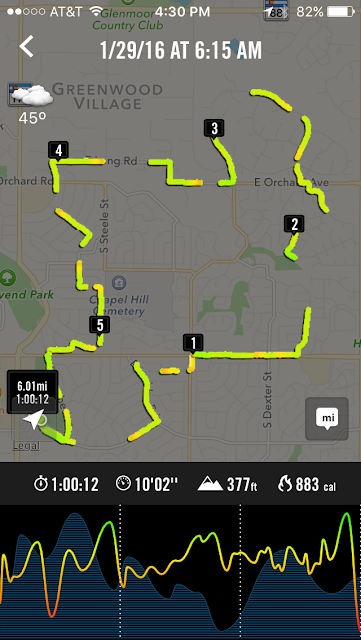