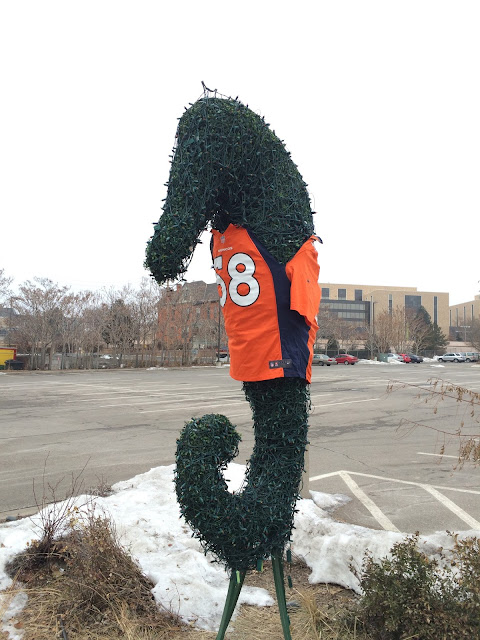 It was a Broncos playoff Sunday, and a local grocery store chain has been giving away some cool Bronco magnets throughout the state this week. Most of the locations were much too far away from me to be manageable, but the very final giveaway was happening at 7AM in a location that was reasonably close to home, and also quite close to places I routinely run, so I decided to get up early to get a "United in Orange" magnet and then get a run in early so that I could get home in time to watch playoff football (The Seahawks-Panthers game was on prior to the Broncos-Steelers tilt.)

I awoke at 6 and did my morning routine quick enough that after a 20 minute drive, I had ten minutes before they started giving away the magnets. I figured that since it was happening at 7 on a Sunday Morning that this would be a low key affair, however, I was there ten minutes early, and the line snaked it's way halfway through the store. In all, I probably waited 20 minutes to get my magnet, and there might have been a few hundred left at the very most by the time I got mine. I'm not even sure they had enough for the sizable portion of people in line behind me. I was floored at just how nuts the response to this promotion was...although to be fair, it's a really cool magnet.

After another 15 minutes of driving, I was in Cheesman Park and ready to head out to Sports Authority Field at Mile High to check on the stadium several hours before kickoff. There were signs of Bronco Madness everywhere, including at the City and County building where the mayor temporarily declared the street running along the building "Broncos Boulevard" and the Downtown Aquarium (as you can see in the photo above) where two decorative bushes that were made to look like seahorses were both wearing Von Miller jerseys. Even when I ran through downtown...an area that is usually heavy with opponent fans due to the many hotels, I saw very few Steeler fans walking the streets. This made me feel good, as even for a regular season game I'll often see a heavy dose of people in opponents jerseys. I also felt like the Steelers were largely underrepresented when I watched the game on TV, which was excellent.

All in all, the early morning led to a great run, and I was back in time to catch all the football action. A complete win of a Sunday! (The Broncos even won, and will now face the Patriots in Denver next Sunday for the AFC Championship!) 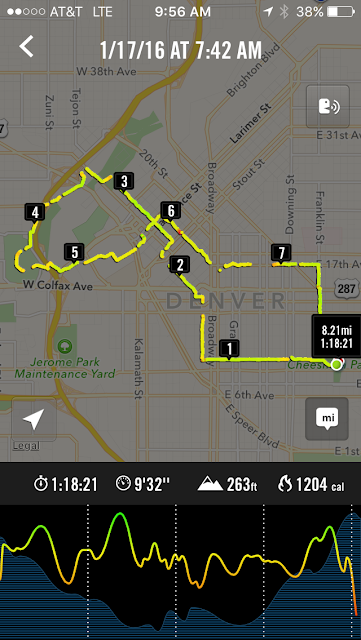