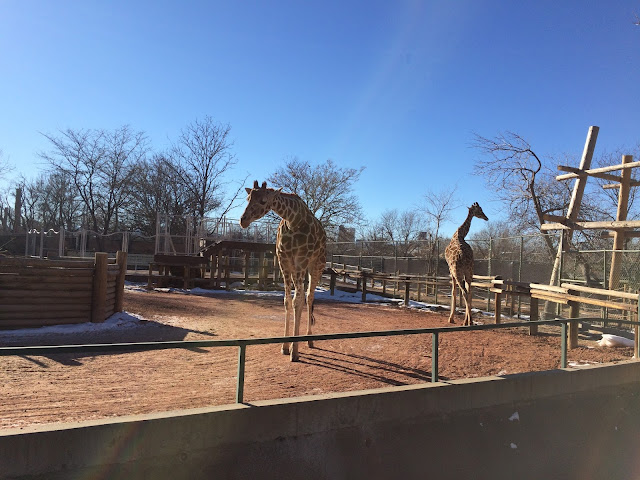 My family had been out of town for days, and they were going to be coming back this first day of 2016, but not until late in the afternoon. This meant I had a holiday off of work, and no real responsibilities to take care of all day, so I could be gone on my run for as long as I felt the need. Add in to that mix the fact that it was the first beautiful day in what felt like weeks and I felt great, and I determined this was going to be a long run.

I began in City Park, and although snow was still everywhere and the lake was frozen, the roads and paths were all remarkably clear, and the bright sunshine made the park warm and inviting. I thought about running through it a few times, but decided that I needed to hit up a lot of different places, so I ran south of the park and then south of Colfax. As I was crossing Colfax, I wanted to get a photo of this strange advertisement sign which was basically a mug shot of a snow-woman. (I still don't really know what was going on there.) However, there was a guy panhandling on the corner right in front of the sign, so what did I do? Well, naturally I walked up and asked if he wouldn't mind moving about ten paces so I could get a picture. Only as I was running away did I feel slightly weird about asking a beggar to move so that I could take a picture of an advertisement. Not too weird, though, as I was still glad I got the shot.

I decided my destination would be Sports Authority Field, as that made for a suitably long run and also let me see the stadium...something that is always fun for this Broncos fan. I was surprised at how many people were milling about the place. It was two days prior to the Chargers game, but I'd guess that there were still fifty or sixty people checking the place out and taking photos. This amused me, but I guess I get it. Broncos fandom makes people do crazy things.

As I was heading back, I was fighting a battle with my phone battery. Could I get back before it dropped to zero and died? It was touch and go for awhile. The charge percentage went from about 50% to 20% remarkably quickly as I was heading back to City Park from downtown. Thankfully, after it dropped below 20%, it's draining rate slowed considerably. This made me happy, as I had brought along my drivers license so that I could show it at the Denver Zoo entrance and prove that I have a membership so that I could include a quick loop around the zoo as part of my run. I was at 17% when I entered the zoo, and I was able to spend about 15 minutes there doing a quick circle around the place. While I was there, I saw giraffes (pictured), a hippo, some mountain goats chilling on a steep cliff, a cheetah surrounded by snow (which seems unnatural), and an emu who was bopping about must amusingly. Also, since it was New Years Day, the crowds were extremely light and I had clear paths everywhere I ran around the zoo. It made for a lovely final mile of a lovely run, and I still had 13% battery power left on my phone when I was finished. It was an awesome start to 2016. 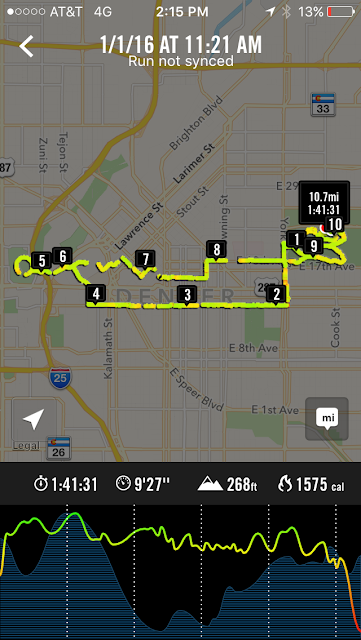