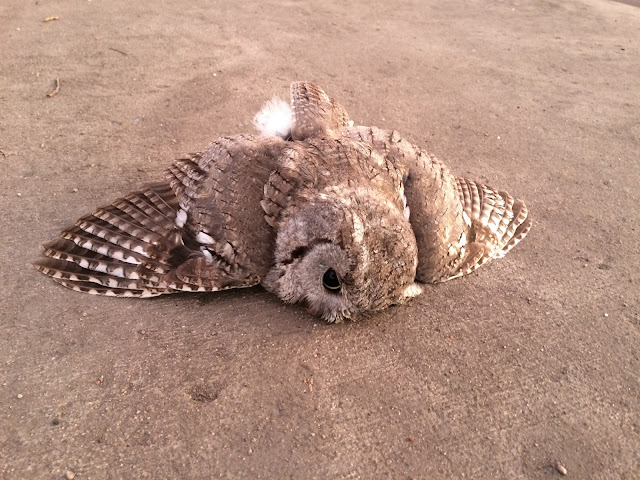 I awoke in a haze this morning. The world felt dreamlike and floaty, and it took me awhile to get going. The first three miles of this run were a continuation of that feel, as I couldn't really get into a good grove, and had to keep stopping to walk and collect myself. It wasn't going well. Then I passed this owl.

I've never seen a dead owl on the sidewalk before. It was surreal, and honestly, a little frightening. As I was taking it's photo, I did so apprehensively, as it's eye was open, and appeared to be staring at me. I half expected that if I got too close that it would lunge at me, and I did NOT have any interest in getting lunged at by an apparently dead owl. I'm not sure I could survive that kind of jolt to the system. Still, it was so fascinating that I had to get a good photo, so I lurched slowly up to a dead owl and took a few pics.

Immediately after that point, it was as if I had been given a jolt of adrenaline. I was awake, I was moving, I was as alive as that owl was dead. I don't know why a dead bird of prey energized me so, but it did. It was like a different morning, and I was a different man.

This was also a run that finished with purpose. That purpose was getting more bread at the grocery store, as we had no bread with which to make sandwiches for lunch today. Oddly that final mile home as I was carrying a loaf of bread in a plastic bag was by far my fastest mile...which leads me to the wild conclusion that Olympic runners should always run with a loaf of bread in order to maximize their speeds. I'm sure that would work, because it worked for me this morning, and that's probably a big enough sample size to declare accurately that runners are faster while holding bread. That's science! 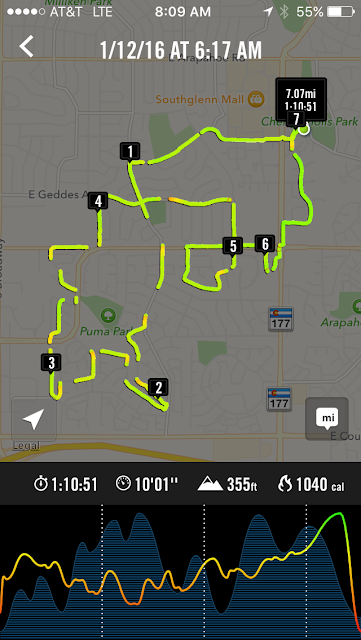