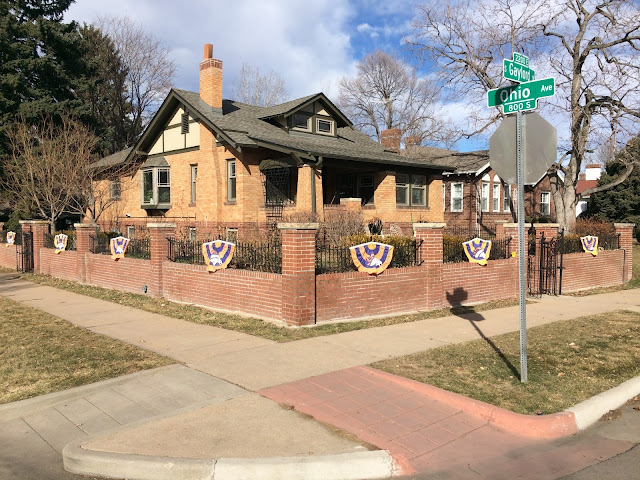 I was fighting low blood sugars for the first half of this run, a little after the four mile mark, I was really struggling and had to walk for a good chunk. Fortunately, I made it back to Wash Park, and there was a Valentine's Day 5K run that was just ending, and there were tents set up giving away all sorts of goodies to whoever walked by. I gratefully accepted some Noosa Yogurt, a Clif Bar, and a Chocolate Toffee despite not actually being a part of the event. They didn't seem to mind at all, and graciously took care of my low blood sugar issue. I felt blessed to have this need met so fortuitously at just my moment of need. I was then able to get in another four miles without any issues, and I felt MUCH better while doing so.

Before my blood sugar dipped, I was running through the Bonnie Brae neighborhood. This is a very wealthy, yet highly accessible neighborhood, and as I traversed it, I was amazed that even in this neighborhood, Bronco pride is still strongly on display. They might show it in different ways that folks do in the suburbs, but they definitely show it. I noticed several orange and blue lights adorning trees, as well as a whole host of banners and the like. My favorite Bronco related thing I saw all run was this somewhat humble (for the area) house with homemade Bronco bunting hanging all along it's fence. It has definitely faded a bit since it was first put out, but it is well done, and looks really cool. Especially as seen in this photo from the street.

As for anything else from this run...I had managed to go a whole week since I had listened to the Hamilton cast album, but after listening to a very good Andrew McMahon album, I felt like I needed to revisit it yet again. It continues to not disappoint, the week off made it feel even more powerful. I am wary of spinning it to death, but I do love it so. Also, in what is seemingly a bi-monthly event, my earbuds died. The funniest thing about that is that I was thinking to myself earlier in this run that I hadn't had any issues with them and perhaps this was a magical pair of earbuds that could actually hold up to my running schedule. The instant I thought that, however, BOOM. They fail me less than an hour later. 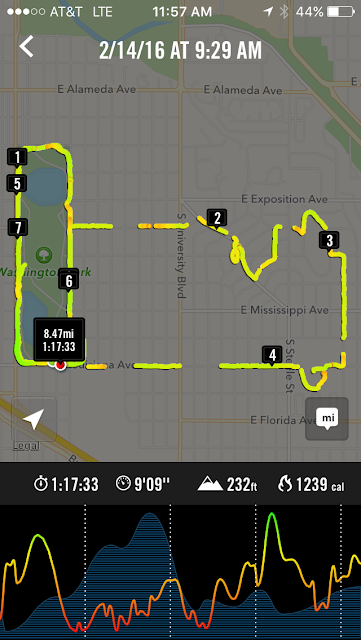