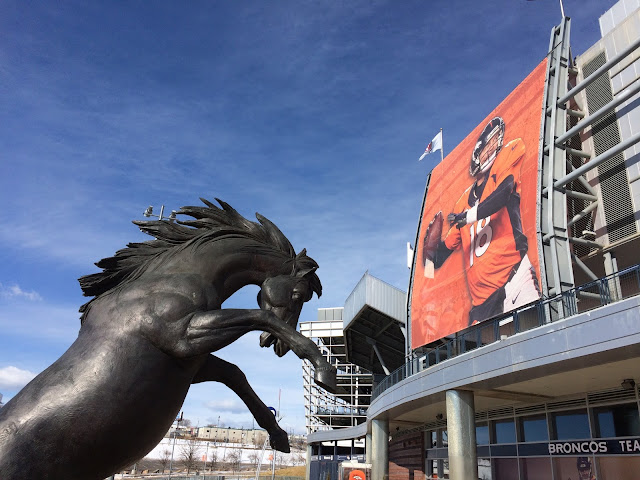 It was Super Bowl Sunday, and my favorite team was going to be involved. Not only that, but they were a significant underdog. I was skittish and excited, and I had a superabundance of nervous energy pulsing through my body. I have never been more thankful to have a glorious day to go running. I needed the release of running through the Denver city streets.

Throughout the playoffs this year, I have been starting each game day at Cheesman Park, and running a loop around the stadium for good luck. True, this is the first time that the game wouldn't be happening AT the Broncos' stadium, but I saw no reason to discontinue the habit, seeing as how it had worked so well thus far. The stadium was significantly less busy than it had been on the two previous runs, but there was still a large contingent of Broncos fans who were heading there prior to the game for what I can only describe as rites of good luck.

It was a beautiful day, but the majority of this run was spent in a bit of a daze, just prepping myself for the big game. I enjoyed Hamilton yet again (I've listened through the whole 2 and a half hour program five or six times by now, and it's just consistently amazing to me) and just hoped that I'd always associate this week's discovery of that musical with a Super Bowl victory.

When I got home, I was slightly more relaxed, since I had burned off a little of the energy, but I kept tensing up as the game got closer, and I was a nervous wreck throughout the game of course, but thankfully, the Broncos won! Had I not had this run to get somewhat centered for this day, the Broncos still would have won, but I feel like I would have had a much harder time powering through to the end, because I'm a ridiculous person who gets way too emotionally involved in professional sports, especially when it's Bronco related. 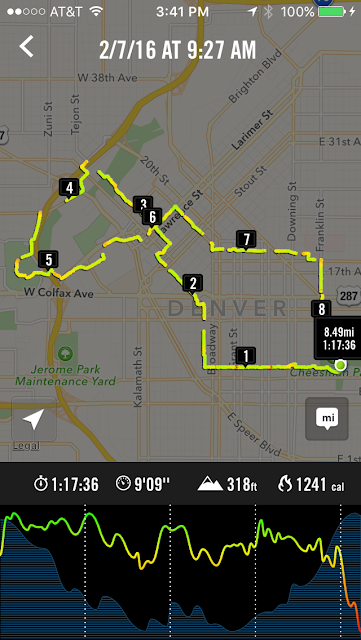