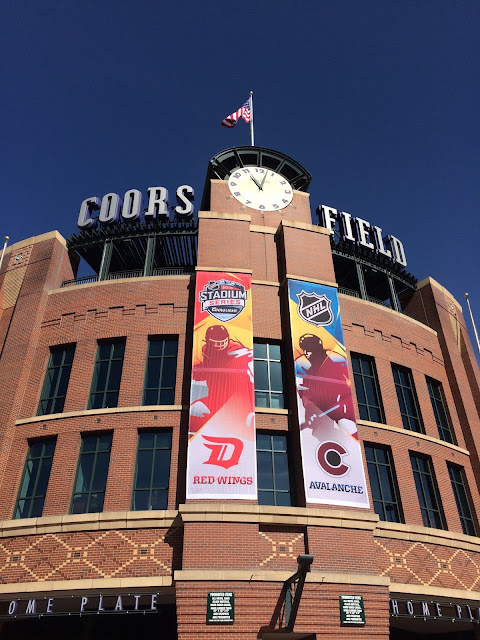 The Red Wings and Avalanche are a week away from playing an outdoor hockey game at Coors Field. It's more than a bit odd to see Red Wings banners hanging from a Denver Area sports arena, and it reminds me a little of when the NFL placed a giant banner of Joe Flacco on the Broncos stadium facade ahead of a Broncos-Ravens season kickoff game. It feels unnatural like that did, but even more so, as it's a hated hockey team being placed on our baseball stadium. I understand why it's there, but it's odd. Still, the banners look pretty cool on the front of Coors Field, and I decided to use this picture, as it's not every day that an NHL event takes place in our baseball stadium. Next time I run past Coors, it'll be a baseball facility again, so this is my one and only chance to post a picture of these cool banners.

I had plenty of other pictures worth choosing from, but decided on this photo due to the limited nature of the event. However, when I first started out on this run, my intention was to post a picture of the Peyton Manning Mural that I previously used on Post 284. I was going to use that picture, because since I last posted it, the artist who painted it added a Lombardi Trophy to the wall in honor of the Super Bowl Championship. That photo will have to wait for another day, though.

I also considered using a photo I took of a marijuana dispensary window. This particular dispensary window had a neon sign (much like you'd see at a bar or liquor store) with a marijuana leaf and the phrase "It's 4:20 Somewhere" underneath it. I'm not a pothead in the least, but seeing as how this was run #420, I gave serious thought to posting that picture. It also makes me think of something funny that my wife said yesterday as we were driving downtown and that distinctive skunky smell attacked our nasal passages. She said, "I think I would have voted against Marijuana's legalization if I realized I'd have to smell it EVERYWHERE." (She's not wrong. It's difficult to avoid that stench in Denver.)

If these photo options weren't enough, I also ran through Five Points, and found a whole bunch of new graffiti murals on the walls of the Art District there. I basically had an embarrassment of riches when it came to photos to post for this run. Reviewing my photos and my map reinforce my feelings that this was a truly great run...a great mix of scenery and strong legs. Plus I knew that I'd be heading downtown a few hours later to hang out with my son at the Nuggets game. All in all, a wonderful Sunday! 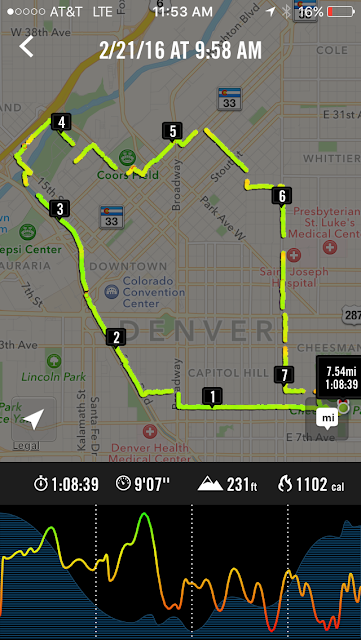