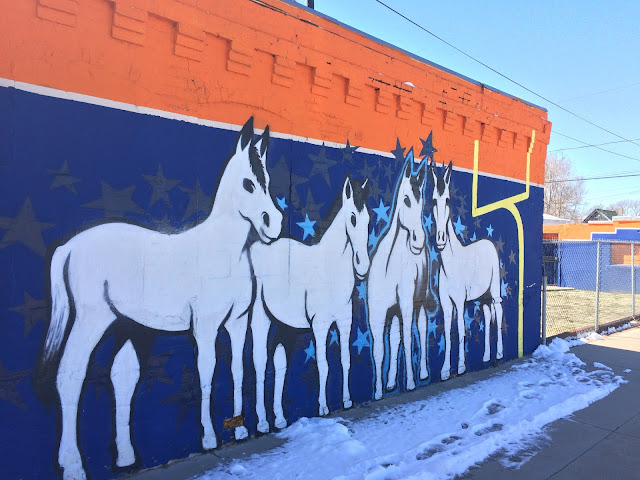 The remnants of a snowy Friday were everywhere, but it was a beautiful day. When I started out, there were snowmen standing in a field of snow in Cheesman Park, but two hours later when I got back, the snowmen were still there, but all the snow had melted, leaving the snowmen standing on grass. It was a dramatically fast melting of snow, and was quite jarring to see.

I also suffered from expectations of cold. It was a chilly morning when I started out, so I wore a hoodie, but twenty minutes into the run, I was greatly regretting this overkill. I was really sweaty, and the hoodie was not helping.

Larimer is quickly becoming one of my favorite streets to run on. It is home to the 5 Points Art District, and there are so many cool graffiti walls everywhere. The technical brilliance of people with spray paint is unbelievable. The art is really fun to take in, and it changes every few months, so there is always something new to see. I ran all the way up to 37th Avenue and through some North Denver neighborhoods that were a little underwhelming, but just as I was getting ready to head south towards City Park, I saw a bright orange and blue building. This being Denver, I had a feeling that it was Bronco related, because just about everything orange and blue in Denver is. I wasn't disappointed. I found Lucero's Mexican Food. The restaurant was closed, but the outside of the building was the real story for me. There were all manner of Bronco themed spray painted shenanigans going on here. The quality of the art was not remotely as good as what I saw on Larimer, but because it was Bronco themed, I let it slide. I posted my favorite section of the wall for today's picture...four white horses standing near an oddly proportioned goal post with stars surrounding them. Pretty good stuff!

I finished up heading south and running through City Park and then back to Cheesman. It was a very quickly paced nine miles, and I felt amazing throughout. This was a glorious Sunday run! 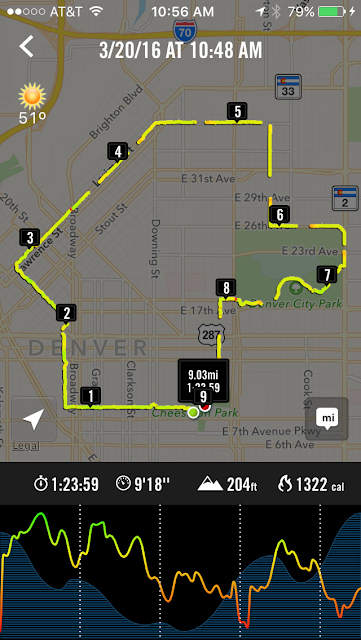