This was one of those runs with a purpose. My car was in the shop, and I had to be at work, so rather than make Jen get up early and take me, I just made myself a run commuter. I took a mildly circuitous route, as running straight there isn't quite long enough of a run for me and would have also forced me to spend large amounts of time on large roads that are unfun to run upon. The majority of this run felt like I was pushing myself through neighborhoods uphill. Lots of hills in this direction, but also lots of interesting little rabbit trails to divert myself down and see where they go.

I was able to do a fair bit of discovery, including this front yard lighthouse. If I hadn't already discovered this lightouse, I might have been impressed with this American Flag themed job. As far as weird things in a front yard go, this is pretty good, but it pales in comparison with the other lighthouse several miles west which might be an actual working lighthouse.

This is the first run I made since the time change, and I could definitely feel that I was running earlier. I had less energy, and felt a bit spent. It wasn't a terrible run, I felt okay for most of it, but I definitely was tired and slightly slower than I have been recently. I'm blaming that on losing an hour's sleep and feeling like a dead man waking each time my alarm goes off thus far this week. This run was memorable, if for no other reason than it is only the third time I've ever run-commuted, and I enjoy doing that...even if the shower at work has the water pressure more fit for an elephant than a human, and the shower head is so low that I'm assuming it was installed by a 4'11 man. Oh well, at least it got me clean. 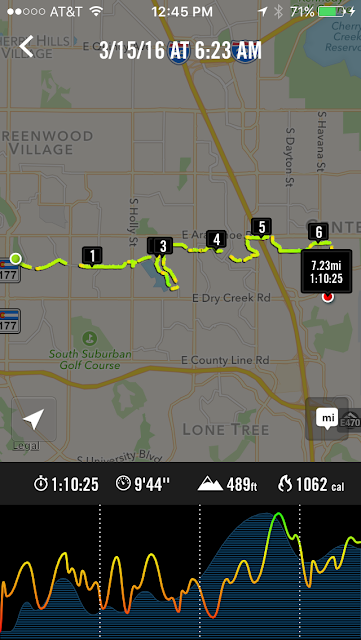