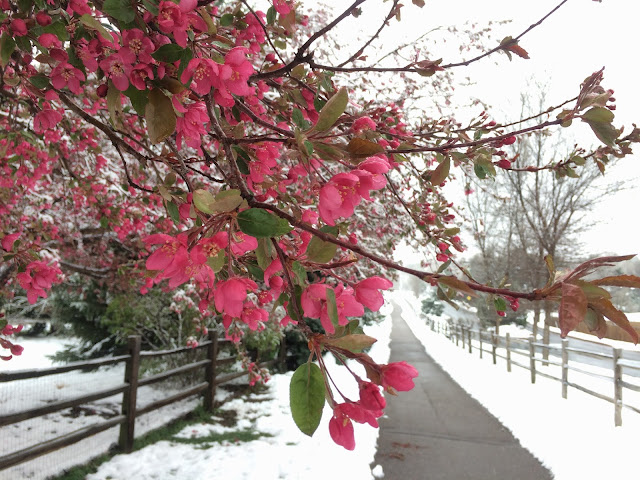 I had to skip my Sunday run thanks to the never ending weekend snow storm that swallowed up all of Saturday and most of Sunday and left the world buried under a pile of heavy wet spring snow. After skipping my favorite run of the week, I was excited to get back out there again on Tuesday morning. I figured the nasty weather had passed, as Monday had been dry and warm enough to enable a lot of melting. I prepped this morning without looking outside, and burst outside ready to get running only to be confronted by heavy falling snow.

I was truly bummed out for a few seconds. I even gave a few seconds of serious thought to abandoning my plans for a morning run, but then I decided, "Screw it, so you get a little wet." At 35 degrees outside, it wasn't really cold and the streets were dry, and I needed a run. I just started running west without thinking. My glasses were bombarded with flakes, so for the majority this run I was looking at the world through water spots.

The heavy snow over the weekend wreaked havoc with the trees, which as you have likely seen over the past few posts on this blog, have already started flowering. The new leaves and flowers took on spring snow like a magnet, and the weight of that moisture caused a ton of branches to break off on trees everywhere. I passed piles of broken tree limbs everywhere I went. One such pile looked like a pink tree had been murdered. There were pink flowers staining the snow and branches piled up in the streets. It made me sad to see such devastation, even though the trees are probably fine. My beautiful pink trees getting clobbered by spring snow stinks.

At one point, I ran past a field that had a snowman in it, however it only had one eye. I approached it, and saw the stone that had fallen out of it's eye socket, so I picked it up and made the snowman whole again. I don't know if repairing a snowman counts as a good deed (It almost certainly doesn't), but if by some miracle it does, I did my good deed for the day. It made me happy to see the snowman with two eyes as I walked away.

However, the absolute greatest moment of this run happened near the end, as I was jogging through a Trader Joes parking lot. This heavily bearded guy with a man bun who looked like he might teach yoga to children looked at me as I jogged through the parking lot, smiled, and then gave me an enthusiastic thumbs up. That might sound corny, but let me assure you that it was awesome. It's hard to get much more motivated than have the fitness man bun guy give you a thumbs up. I felt amazing all the rest of the way home. That guy has powerful thumbs, man. 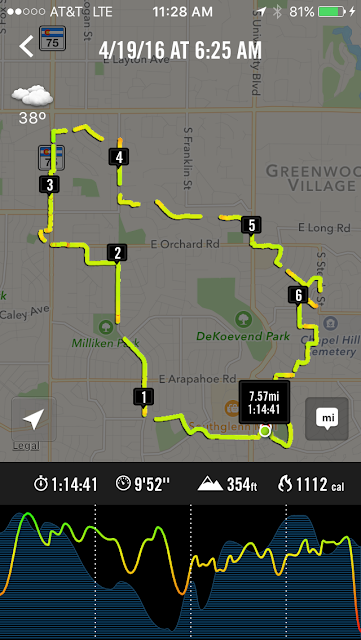