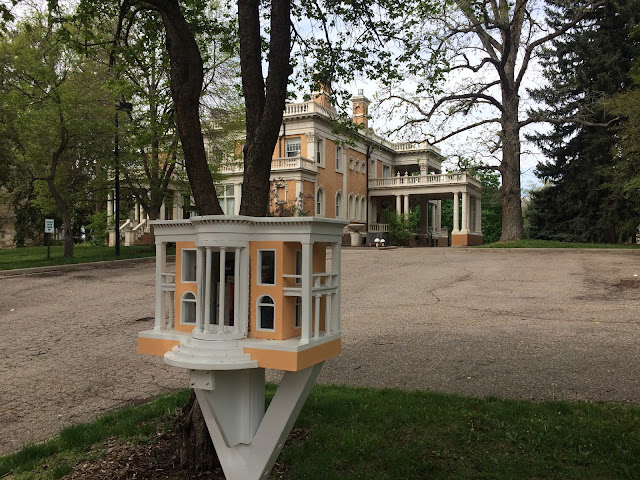 For the third weekend out of the past four, the weather was kind of miserable for the entire weekend after being kind of nice during the week. I'm a little annoyed at this weather quirk, but at least Sunday morning provided a brief respite of nice weather during the otherwise rainy weekend.

What you see above is the Grant Humphries Mansion. Built in 1902, it shares Governor's Park with the Governor's mansion, and it's a lovely piece of historic architecture in Denver. It also now has a free lending library in the same color and style out front which is stupendously less historic, but no less wonderful in its silliness than the mansion is in its historicity. The fact that both of these things exist symbiotically is a wonderful testimony to something...I'm just not sure what. I like it, though, whatever it is. I've run past this mansion on several different occasions, and I'm reasonably sure that this is the first time this mini mansion has been out front. I'm slightly bummed that I didn't peek inside it to see what kind of books are available.

I began this run at Wash Park, and made it all the way to Civic Center Park on this outing. It was a little bit difficult to get around Civic Center, as the Cinco de Mayo festival was in full swing, and although it seemed relatively sparsely attended, the whole park was surrounded by chain link fence. I finally found an entrance into the park, and as I ran through to the other side, I passed a cavalcade of souped up muscle cars next to a fence. Gear heads were engrossed in this monument to vehicular excess, but all I could think to do was scan the fence to see if there was any break in it which I could slip through and continue on my way. Thankfully a security guard noticed my plight and manually opened a gap in the fence for me without me even having to ask. Full marks to that guy, because it's so rare that someone anticipates the exact thing I'm hoping for and then provides it to me without me even having to ask. It was a lovely moment, and he was a lovely man. 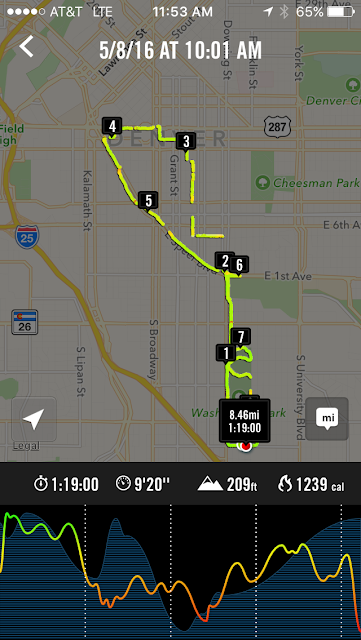