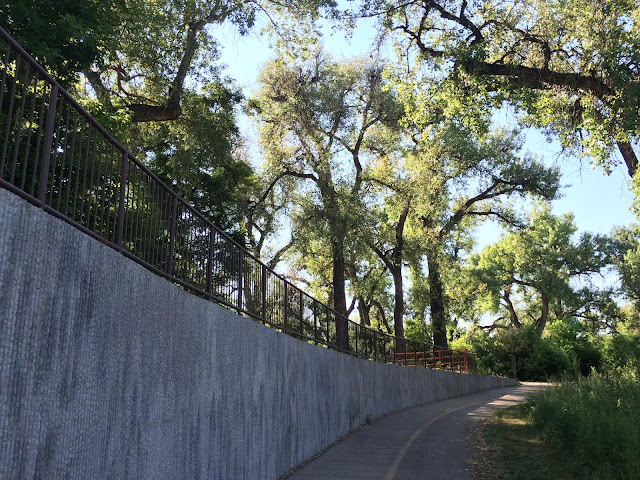 I had taken a volunteer day from work, because I was going to head down to Royal Family Kids Camp and spend the day helping out, but it also meant that I had a little more morning than usual to play with, so I decided to drive a bit west and start my run over at Broadway and Mineral so that I could go a little further south on the Highline Canal than I ever have before.

I was able to get quite a bit further south than I have ever been on the Highline, and what I found horrified me. Highlands Ranch has this nasty habit of paving their trails, and in a move that can only be described as sacrilege, they paved over their section on the Highline Canal Trail. It actually wasn't terrible, but the naturalness of the Highline Canal is part of what makes it so special and wonderful to run, and as soon as you reach Highlands Ranch, they kill it.

I have a longstanding dislike of Highlands Ranch, and this did nothing to improve it's standing in my eyes. Then, on top of this horrific discovery, my earbuds broke. This is nothing new, as it seems to happen every six weeks, and I've probably exchanged at least 20 pairs of earbuds at Best Buy in the past five years, but it was still annoying as it happened about halfway into the run, and I was forced to run without accompaniment.

Even more exasperation, when a route I thought would take me directly where I wanted to go turned out to be much more difficult than I expected, as travelling the way I had hoped would have required me to jump down a cliff that was about four stories high. I declined on allowing gravity to assist my speed on this run THAT much, and decided instead to find another way which involved me traipsing through a field, crossing a major railway line, and then running north on the incredibly busy Santa Fe Drive with an unfortunate lack of sidewalk. (Though thankfully, it had a very large shoulder.)

I've described nothing but troubles, and yet this was quite a pleasurable run. I ran the first three miles in under a nine minute per mile pace, and then slowed significantly, but the weather was gorgeous, I knew I had a fun day ahead of me, and it was fun to run in a place I was unfamiliar with. So although I was plagued with trouble, my heart was glad. And I'm really starting to dig the new Avett Brothers release. I heard most of it before my earbuds died.

And most importantly, I hit the 100 mile mark for June on this run, making it 30 straight months! Fanfare!!! 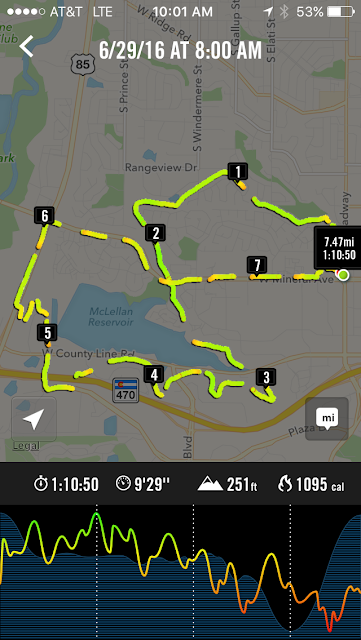