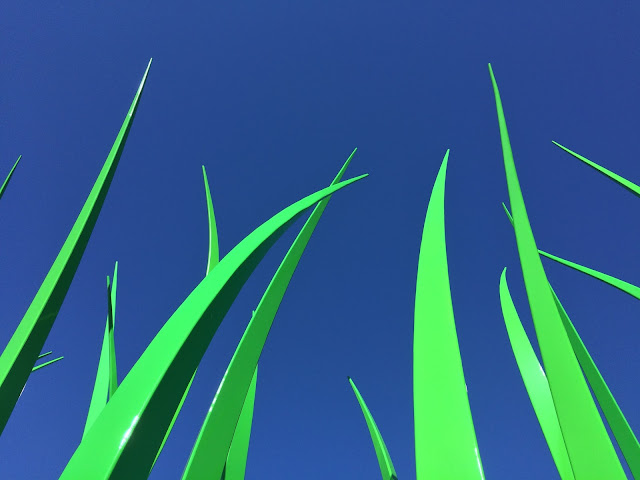 Friends from my church are getting ready to head to camp, and although I won't be there all week, I do get to go up as a volunteer on Wednesday, and I also had the opportunity to help by letting them use the Olympic rings that Jen made for the Kids Who Care club Olympic event last month. The problem was, they needed those rings, and I wasn't sure how to get them to the team. Then I remembered that every year they leave around noon from our church on the Sunday that camp begins. So, I headed up to the church building to drop off the Olympic rings and I began my run from there.

I headed north from there, and quickly found myself headed in the direction of Wash Park. Rather than fight that inclination, I just listened to the newest release from the Avett Brothers and got caught in the gravitational pull of my favorite park. I passed by the huge blades of fake grass on Broadway, and decided to take this picture of them, and kept on heading up that way, then did one loop around the park and then headed back...all the while listening for the first few times to "True Sadness", an album that has some solid moments, but that I haven't fully embraced just yet. It often takes a few spins before I really get into an Avett Brothers album, and this one feels weird as it has much more instrumentation than I'm used to from this group. Still, the Avetts are one of my favorites of all time, and this is a solid bit of work from them, so I'm going to keep mulling it over until I decide exactly where it fits.

As for this run, I was able to get the Olympic rings to a place where they should be able to be used, and I inched ever closer to my June 100 miles...I need less than six miles to get there this month. 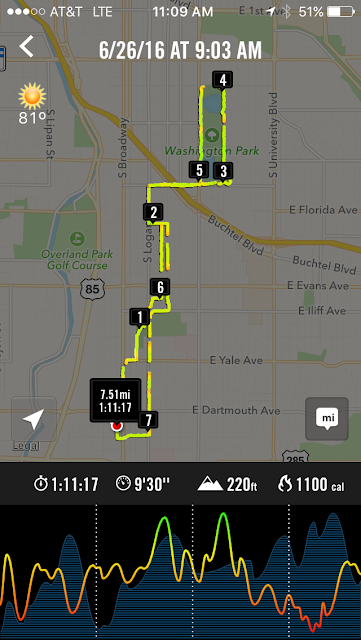