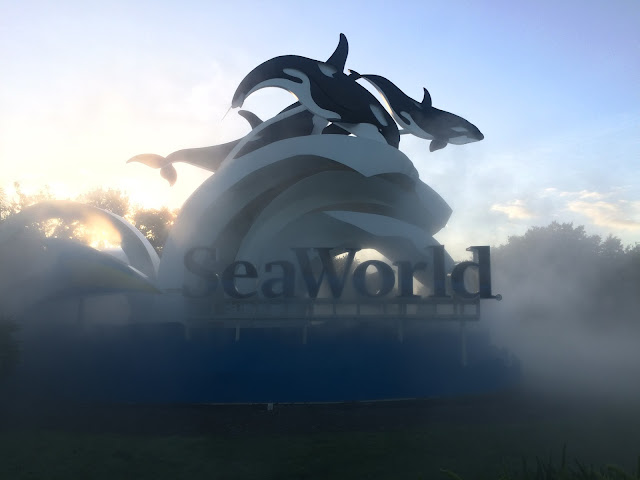 After not running for four days in Florida, I decided to go two days straight by running on the final day I was in Orlando. The night before, I realized that I was also within running distance of Sea World, so for the second straight day I had a theme park destination in mind as I started out on my run. I began by going a quarter mile to the north, because it was so early that it was still dark, and the Orlando Eye was still lit up, and I thought it would be cool to get some photos of the lit up Ferris Wheel.

I got some great pictures of the Eye, and then headed due south, through the Convention Center district once more, and then went even further to the South in the direction of Sea World. I first looped around Aquatica, a small water park run by Sea World. Then I realized where Sea World proper was, so I decided to circle the entire park. I ran right past the entrance. They were still two and a half hours away from opening, so I expected to see no one, but the park entrance was alive with gardeners taking care of the vegetation and parking lot workers cleaning up the massive parking lots with blowers. There were probably 15 workers out taking care of the grounds, and several of them gave me some weird looks as I jogged around the entrance to a theme park I never even attended this trip. Then, as I ran around the south edge of Sea World, I found it's sign. The sprinklers were misting, which gave the sign an otherworldly quality with the sun creating a foggy atmosphere around the sign. I took a photo and immediately knew that my pictures of the lit up Orlando Eye would NOT be the photo for this day's run...the sign for Sea World was just too cool.

After looping Sea World, I found a different Wawa from the one that had become a home base of sorts for me, and I bought a beverage to replenish all the fluids I was sweating out. As I was leaving the Wawa parking lot, I saw a car with Miami Heat license plates, so naturally, I took a picture. On the way home, I saw an ibis just hanging out in a nearby pond, and had to take pictures of that too, as I don't see too many ibises in Colorado. When I got back to the hotel, I was ready to shower and get ready to say goodbye to Florida, but I was really happy that I took one final run. 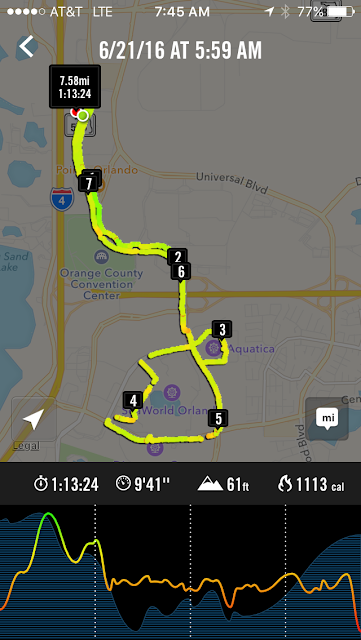