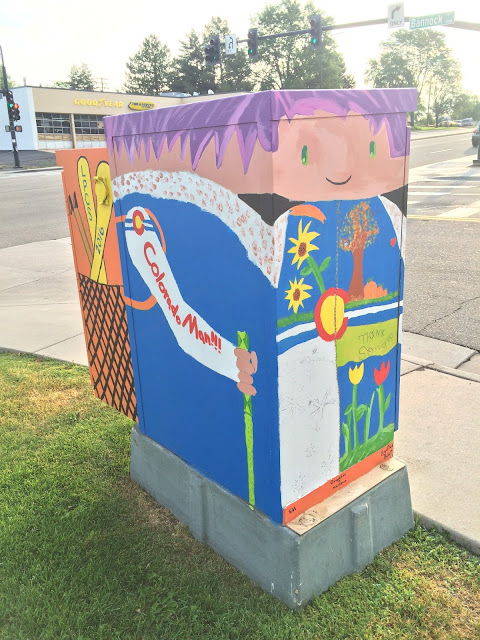 That map is hilarious. That is the map of a man who woke up this morning, realized he was drained, and tried to go running anyways. I salvaged four and a third mile of distance this morning which pushed me over 100 miles for July (31st straight 100 mile month for those playing along at home.) However, this run was more walk. That's okay, it was the second straight morning, I didn't get a great night's sleep, and sometimes you're just tired. Plus, it was still a lovely morning outing, even if the running aspect of the proceedings were anemic.

Today's photo comes from the corner of Bannock and Littleton Boulevard. I've noticed this brightly colored electrical box before, but I was never really able to figure out what it was supposed to be until this morning when I stopped to look at it for a moment. The reason I had never figured it out before today, is that it only makes sense when you look at the side that has the guy's face. I've usually only seen the backside of "Colorado Man" which is his backpack. However, if you only see the backpack and don't understand the context of what it's supposed to be, it's mostly nonsensical orange paint. Today I finally saw the face, then understood what the arm was, what the backpack was, and everything else. It's a backpacking avatar for the type of healthy human that is attracted to life in Colorado. Apart from the purple hair, it feels about right. But I'm not going to complain about purple hair, because it's rather awesome.

The funniest moment of this morning's run also coincides with the longest stretch that I spent actually running. I was getting ready to cross Broadway, and I hadn't even reached three miles run yet. I was stopped at the crosswalk waiting for it to turn when three high school aged girls ran up from the south and also started waiting to cross. We all crossed the street together, with them slightly ahead of me. As we ran, I quickly noticed that I was moving at almost the exact same speed as they were, about ten feet behind them. I continued at this pace for a few hundred yards, but quickly felt really creepy running so close behind them. The smart thing to do would be to stop and let them move ahead so far into the distance that they were no longer really close and I wouldn't have to worry about looking like a weird creeper. However, I instead decided to pass them so that I would be running ahead of them. Keep in mind, I've been struggling throughout this entire run and definitely don't have my strongest legs...now I'm trying to out pace high schoolers. I get ahead of them, and put a tiny bit of space between us, but not enough to feel super comfortable, and then run for about a mile at a faster pace than I had run all morning just so that they wouldn't pass me up again.

I finally realized that this was stupid and I was tired, so I swallowed my pride, took a rest, and let them ramble into the distance and out of my life. I guess in a way it was good that they were there, as it pushed me to run harder than I did at any other point in the morning, but it also wiped out whatever remaining energy I had, and the rest of the morning was spent in brief spurts of running as I tried to not be as tired as I was. It didn't really work. Maybe next time. 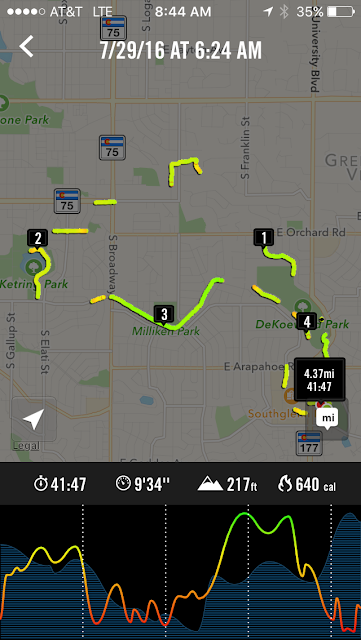