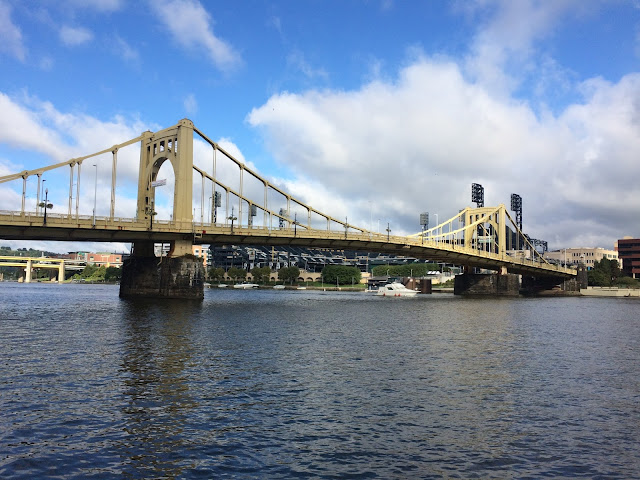 This was an all time great run. Well...the run part was mediocre at best, but getting to hang out with my brother for a few hours while getting exercise and catching Pokemon was great great fun. I also added a 12th state to the blog. Pennsylvania joins Colorado, Kansas, New Mexico, Arizona, Washington, South Dakota, Iowa, Illinois, Louisiana, Mississippi and Florida as places I've run and then wrote about.

This run took place up and down the Three Rivers area of downtown Pittsburgh. I was amazed to find how beautiful Pittsburgh was. I was expecting an industrial wasteland, instead I found a thriving city with beautiful rivers, gorgeous bridges, beautiful skyline and rolling hills. I really liked the city, and liked it even more as we ran up and down the river and found science centers, art installations, a beautiful baseball stadium, a football stadium (Heinz Field is home of the Steelers and about as boring looking a stadium as you can find. Fortunately PNC Park, home of the Pirates, more than makes up for it.) We also found the old Heinz factory which has been repurposed into condos, and looks exceptionally cool. Near the end of our run we found ourselves in a park with a beautiful fountain and it was right at the point where the Allegheny and Monongahela converge to form the Ohio river. It's a GORGEOUS spot, and I might have appreciated it even more if I hadn't been so obsessed with trying to find a Squirtle for my son that showed up on the nearby Pokemon list.

Bruce is almost as into Pokemon Go as I am, so the two of us found ourselves running up and down the river and catching all sorts of Pokemon that we can't find very easily at home. The first few miles were packed with stops as we marveled that we were catching Margicarp, Dratini, Goldeens, Tentacools and Psyducks at such astonishing rates. Our speeds were ridiculously slow through this first stretch, and we only just ran fast enough the final mile to bring our average mile speed under ten minutes per mile.

I love running in new places, especially when the new places are cool. I have about 50 pictures I'd love to post, but I ended up using this one of the Clemente Bridge just in front of PNC Park, as it seemed to best sum up the run. I'd love to spend more time running in this area. 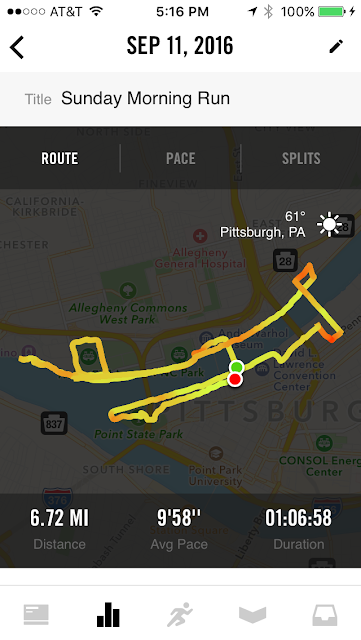