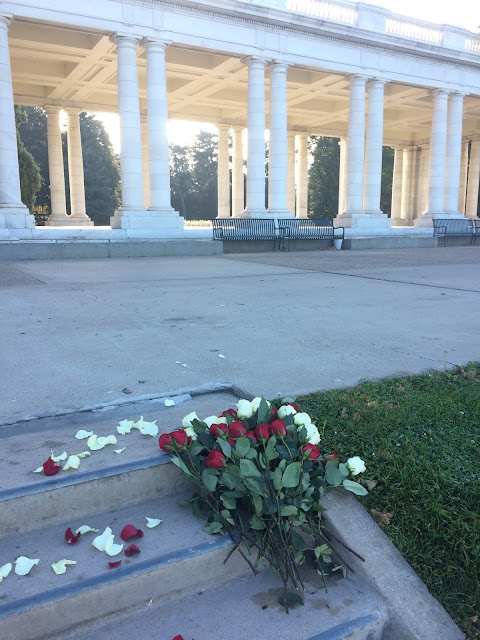 I had taken the day off work, so it was the first of a three day weekend. I had nowhere to be until 1:00, so I decided to take an extended run into the bowels of Downtown Denver and Pokemon Go like there was no tomorrow...and also run. I am the last of the truly wild people. I mean, I know how to party. (Pronounced: Par-tay)

I began at around 8:30AM in Cheesman Park, and as I approached the iconic one hundred and eight year old Cheesman Pavillion, I noticed a huge bundle of roses and petals strewn about as if someone was trying to REALLY up their romance game. I decided to take some pictures when I was quickly approached by a woman in her 50's who looked very happy and mildly worried that I would screw up her morning. She proceeded to tell me that her son was about to propose to his girlfriend, and they were lurking in the shadows to take photos of the event as it was happening. I think what was left unsaid was that I should get my sweaty butt out of there pronto, but she seemed nice, so I didn't linger. I told her congratulations and headed out on my way. I hope everything went well for the happy couple.

I made one loop around Cheesman, and then decided to go back to my car to retrieve my mobile phone battery charger, as I figured there was a good chance that I would drain my battery super quickly playing Pokemon and would need a little backup juice. (This turned out to be a good decision, as I definitely needed additional power.) As I was heading towards Civic Center Park, my right foot clipped a jagged edge of sidewalk and I went sprawling awkwardly to the ground. I landed on my elbow and the battery pack slammed into my quadriceps, so I was hurting for a sec. A guy that was painting, whom I had just passed twenty seconds previously stuck his head out to look at me, but didn't ask if I was okay or head in my direction. He just stared at me as I lay in pain on the ground, so that was weird. I gathered myself and got up and after walking a few blocks, felt good enough to continue the journey towards downtown.

When I arrived downtown, I was greeted by a Pokemon smorgasbord. More cool rare and wonderful Pokemon that I usually ever see were popping up everywhere, and I was catching like crazy. Plus, there are roughly ten trillion Pokestops down there, so I felt like I had died and gone to Pokeheaven. I spent WAY too much time hunting down monsters and halfheartedly running. Eventually, after catching a Bulbasaur on the front lawn of the Colorado State Capitol, I realized I really needed to get moving as I was running out of time to be downtown, and I did NOT want to be late to get home, as I needed to take my wife to the airport. So I reluctantly bid adieu to the monster parade and ran back home. My Pokedex was stronger, but my elbow and leg were throbbing. All in all, it was a pretty memorable run. 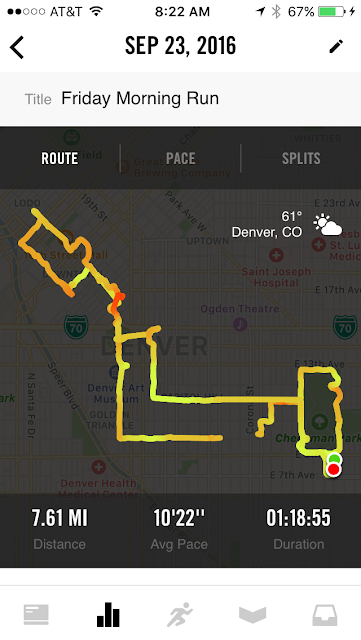