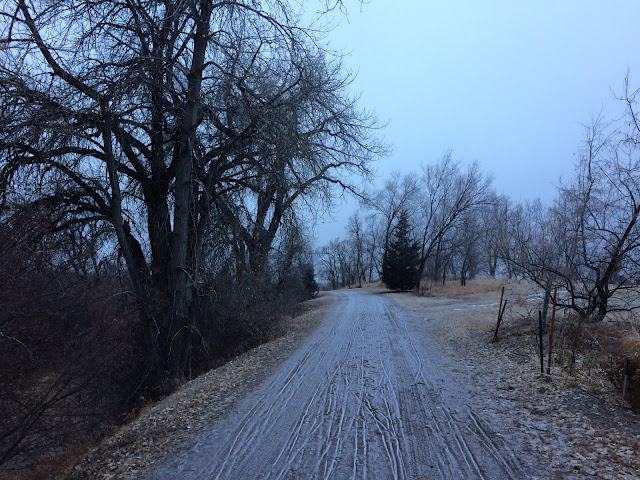 February 3, 2017
7.25 Miles in 1:17:29
Mood: Slippery and afraid.
Soundtrack: The Mountain Goats "The Life Of The World To Come" and "All Eternals Deck" and Transcendental Youth"

For the past two days in Denver there has been this odd precipitation. It's not quite snow, not quite rain, but it's somewhat powdery and it falls and immediately turns everything to ice. I spent most of the morning running on trails like the one pictured above, and while on the trail, the running was pretty smooth and easy. The ground was frosted, but this made the world kind of pretty and not at all slippery, and I was able to get a pretty decent pace going.

However, this outing was bookended with icy terror for both the first mile as well as the final two miles. During those sections, I was jogging in fear for my life. Every step was an adventure in bad footing. On more than one occasion I had to throw my arms up in a wild panic of attempting to balance and not go sliding to the ground. It felt like I was wearing skates rather than running shoes whenever I encountered a sidewalk. I'm not sure I've ever had a run that was this slippery. As a result, although I felt really good today, my pace is fairly slow...because when I was running on the paved sections of this run, I never once took a step that I felt confident in, and as a result I was taking the slow measured steps of a man striding on ice. Those slow measured steps do not lead to great speeds.

Fortunately, I didn't fall once, and I was able to get over seven miles logged, so it was a total win. A win despite feeling endangered the entire time I wasn't on a dirt trail. 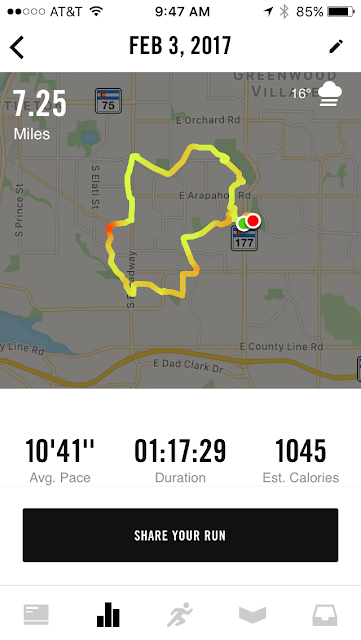