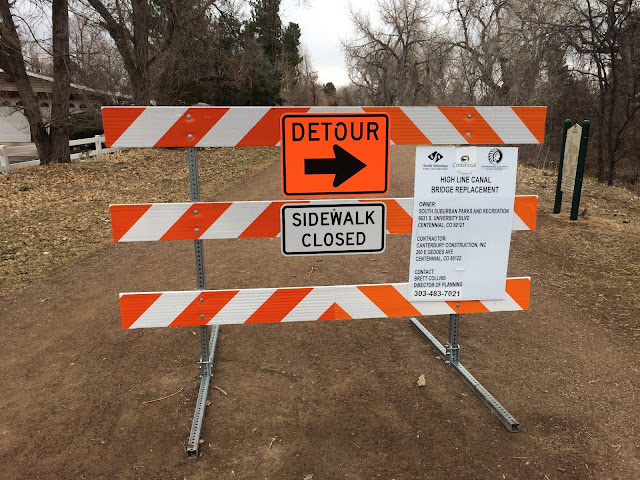 In the past two weeks, the weather has been outstanding. Temperatures have routinely hovered in the 60's, and occasionally into the 70's. This is not normal for February and I am trying feel worried about climate change, but mostly I've just been super thankful for the warm weather. That hot streak ended abruptly this morning. It is not that it was cold outside, it was around 30 most of my run, but 30 with bouts of getting dumped on by light snow feels much more acutely arctic when you've been used to t-shirt weather. Man, it was chilly. The snow was more like tiny pebbles than actual snow, and was quite dry which I appreciated, but I was still annoyed that it was snowing on me. I'm hoping that this cold snap doesn't bring any snow accumulation with it.

I posted the above photo of the "Detour" sign blocking the way of the Highline Canal trail only to state that I (and MANY others) have been routinely ignoring this sign and using the trail anyway. Mostly because the only thing that is happening is pedestrian bridge work on one tiny section of the trail, and although they have put up netting covering most of the trail, it is still remarkably easy to squeeze through on the 10% of the trail that is not blocked. Plus, since I have not yet seen a single worker working on any of these bridges that are alleged to be under construction, I feel that my lack of a hard hat and construction training does not put me in any greater danger than the average bunny who also can be found all along the trail. Basically, every time I see these Detour signs, I get a surge of pleasure from embracing anarchy and completely ignoring them. I love to break inconsequential rules. 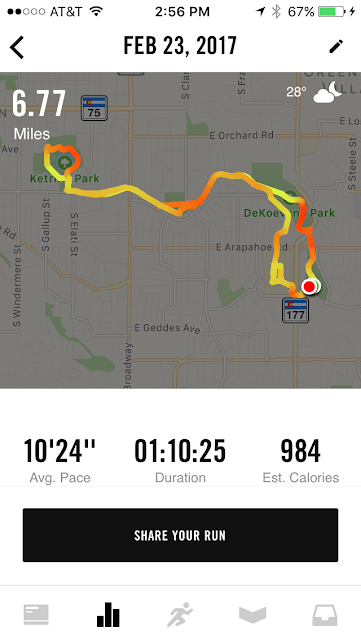