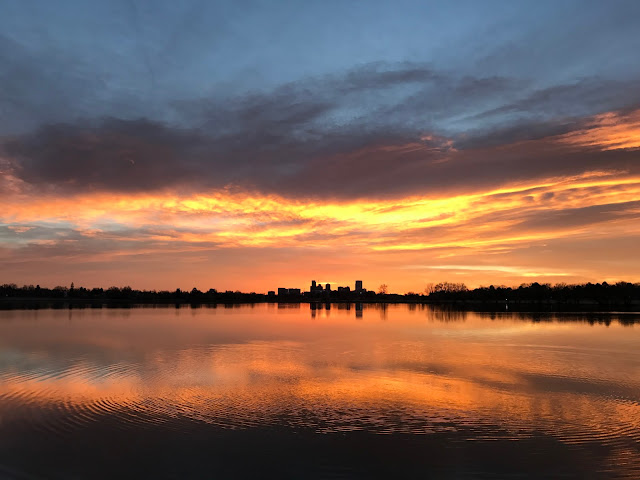 Although I remain against the concept of Daylight Savings and the artificial manipulation of our circadian rhythms for God knows what purpose, it is not without it's advantages. The daylight lasting longer in the evenings is nice, but I've really been enjoying how I've been able to see some AWESOME sunrises on my morning runs.

This particular sunrise was one of the best I've seen in awhile. It helped that I was at Sloan's Lake and was able to watch it rise over the lake with Downtown Denver in the background. My timing could not have been more perfect, as about two minutes into my run I was able to capture the photo above. It was awesome, and while it only lasted for about six or seven minutes, I was in exactly the right spot to take advantage of these colors. I really adore sunrises.

I struggled a bit at the beginning and end of this run, as I had a slight headache during the first lap around the lake and my blood sugar cratered a bit at the end of my run during the third lap, but that second lap was pure perfection. I hadn't felt that good in awhile. I suppose it helps that the trail at Sloan's Lake is almost as flat as Kansas, but I was zooming. I was a little bummed when a low blood sugar crushed my groove, as I was feeling it, but briefly it was perfect. 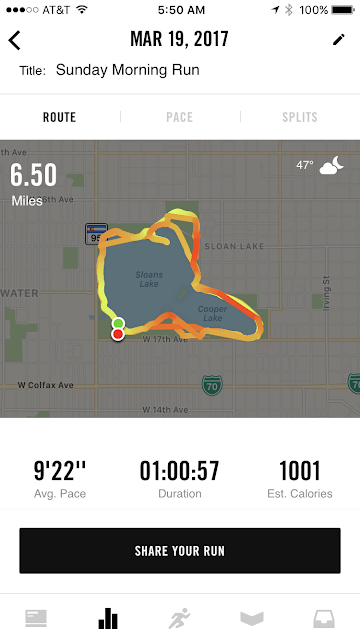