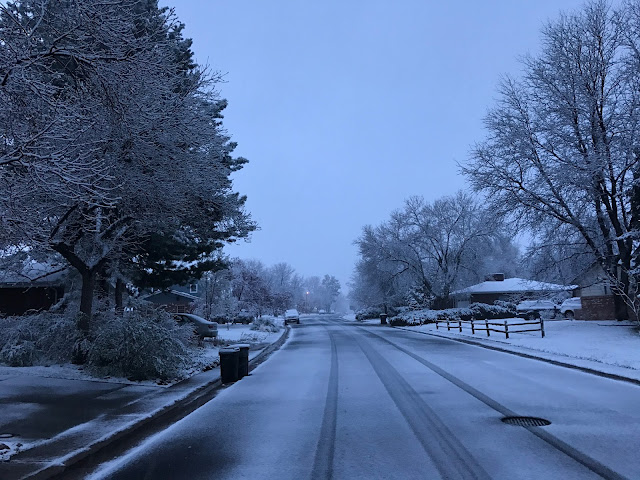 I needed to get to work early today, so I knew that if I ran I wouldn't be able to go quite as long as normal. The forecast was calling for a spring snow, so I knew that it might be a sketchy morning to go running. I awoke at about 5:15, looked out the window and ALMOST bailed on this outing. Instead, I got ready, ate breakfast, got dressed warmly for a run in snow, and headed out. In the short time it took to get prepared to go running the snow intensified, and for the second time that morning, I strongly considered bailing on the whole endeavor and going back to bed.

I'm not sure what, but something got me out the door. That might have been a mistake. The snow was falling fairly heavy. It was very wet and slushy, so in short order my socks were soaked. Plus, this was just the second time I had broken out my new running shoes. They are cushioned much differently than my old shoes, and at times I had a hard time telling if I was slipping or just enjoying a very cushiony shoe. I didn't seem to be slipping, but the sensation my foot was experiencing was odd. I did my best to make a decent outing out of this run, but there were too many puddles, too much snow, and I just was not feeling it this morning. I squeezed out almost four miles before giving up and heading home to get ready to head to work early. Fortunately there is very little snow in the upcoming days, so hopefully things will get back to good quickly. As it is, I have now run two consecutive times without breaking four miles, which feels very odd.

When I got home, my wife was laughing at how much snow had accumulated on my hat. I have to admit, it was an astonishing amount. I had my own mobile snow drift on my head. 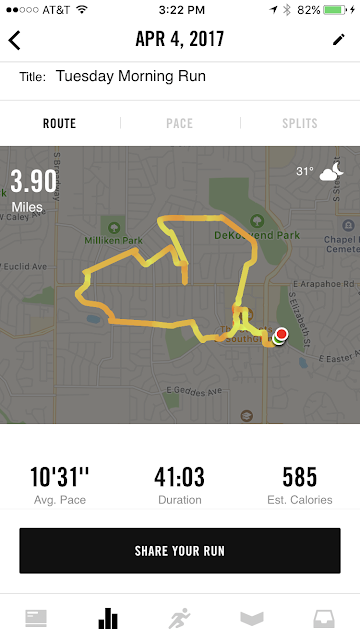