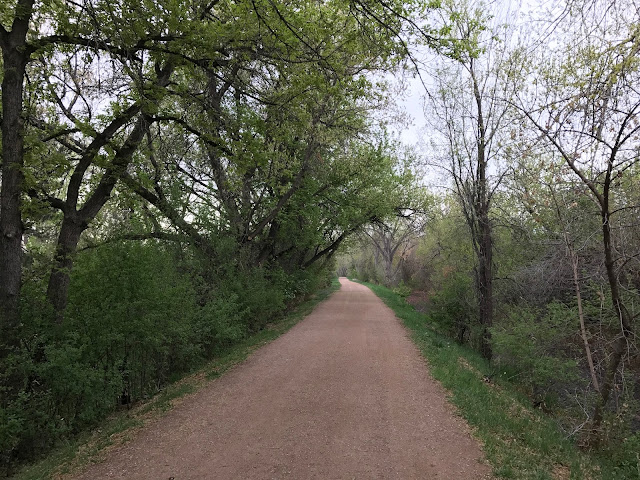 April 21, 2017
6.27 Miles in 1:02:19
Mood: Green and Groggy
Soundtrack: The Wilderness of Manitoba "When You Left The Fire" and "The Leslieville Sessions" / Fall of the House of Sunshine / The Wood Brothers "Paradise"

After weather forecasts had me worrying that if I tried to run this morning that I'd come home drenched in rain, I managed to get through the entire morning without a single drop hitting me. Although there was no precipitation, it was quite dark and gloomy throughout the run. (at least by Colorado standards). I took the photo above because of just how green and lush it was, and then the cloud cover somehow made it look even more darkly green. The intense verdancy doesn't really come through in the photo. It was SO GREEN in that moment (at least by Colorado standards).

I only managed six miles on this run, and it could have been less, although I finally got into a bit of a groove towards the end. I had one of those mornings where I just kept stopping to walk. It wasn't even that I was tired, my legs just felt beat and I was slightly groggy, and it was a lovely morning for walking, I guess. It felt good being out in the world today, even if I wasn't running as much as I should have been...only six miles, sheesh. Terrible. 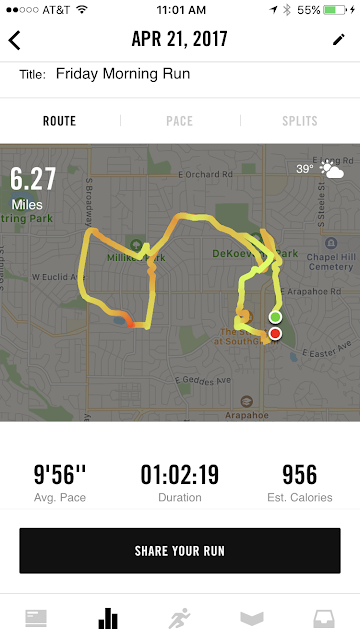