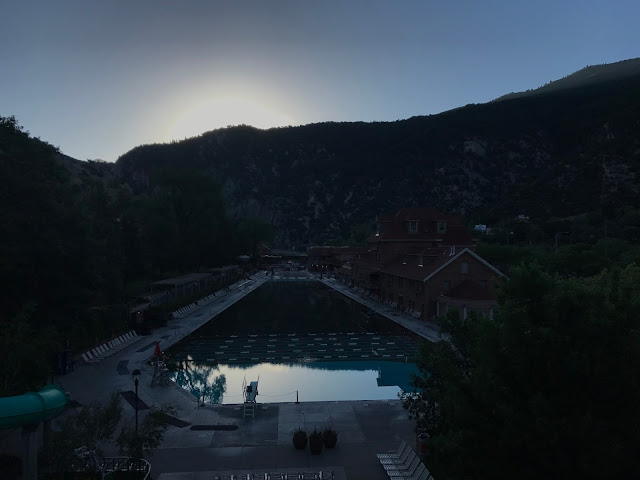 I grew up with Glenwood Springs as my mini-vacation headquarters. When I was a kid, it seemed we would make at least one trip a year to this little mountain hamlet to hike, play miniature golf, shop at the Sioux Villa Curio Shop and go swimming in the giant Hot Springs Pool. To say I have a load of memories of this place would be a huge understatement, it's a part of my childhood.

Going there as an adult always makes me think of being a kid, and taking my kids makes me feel like the tradition lives. I like that I am giving them a little piece of something in their childhood that was also a piece of my childhood. Circle of life, and all that...

Anyway, in all the many many times that I have gone to Glenwood, I have never seen the pool completely empty. It opens at 7:30 in the morning, and stays open until 10 PM, so it does make sense that I wouldn't have seen it without a single patron. On Sunday morning, I was up and running by 6, so when I crossed the bridge overlooking the pool, the sun was rising over the mountains and the pool was completely vacant. It was weird, but also very peaceful. I knew I'd be taking a dip in the water later in the day and that it'd be a hubbub of activity, but it was cool to look at it empty and think back to all the times I've been there and how much that stinky water means to me. It was an emotional highlight of a run that also included finding a secluded park, hitting up a cool paved trail alongside the Colorado River, seeing a multitude of car guys descend upon a park with their fancy sports cars to show off, and seeing parts of Glenwood that I've never before experienced.

Although I've done a lot of things in Glenwood over the years, this is the first time I've run through the town, and as I have discovered in many places...you see different things when you run in a town than when you only experience it via a car. I'm glad to have deepened my relationship with this town that has meant a lot to me. 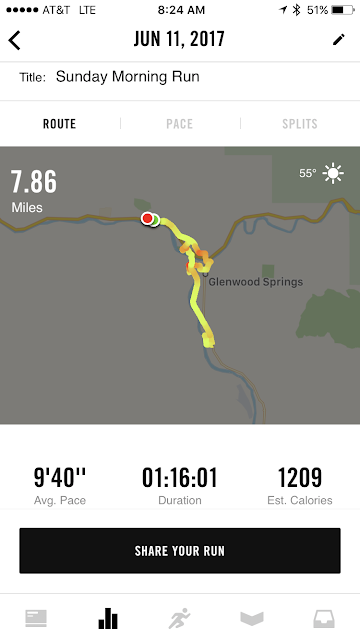