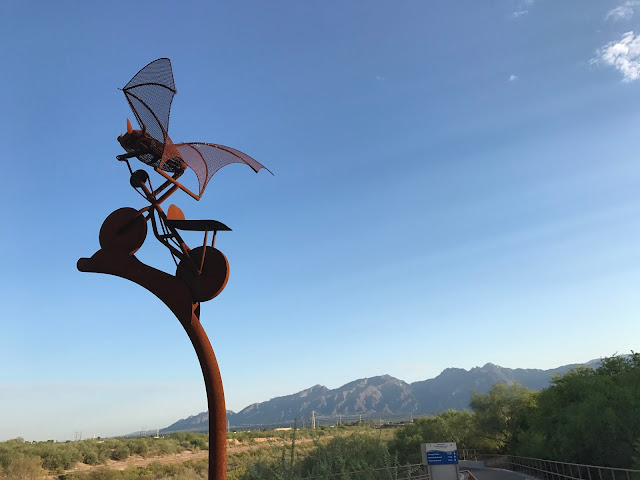 I have been considering this post for sometime, as the six hundred sixty-sixth post has some devilish baggage to it. I didn't plan it out this way, but there is something appropriate that this post should originate from Arizona, as heat is one of the state's defining characteristics. Also funny that I should have a statue of a bat as the photo...for the "Bat out of hell" purposes.

The photo was actually taken at just about the midpoint of this run. It's a very cool statue of a bat riding a bike. The significance seems to be that it is positioned directly next to a path where many bikers ride and also a bridge that is home to a large number of bats. (I just Googled what a group of bats is called, and it's apparently a colony, but if it were up to me it would be a brigade of bats.)

Of the three runs I managed while in Tucson, this was the most "normal" of them all. Bruce and I ran along the Pantano Wash, a dry river bed in middle of the city that has a popular trail for bikers and runners alike. We had a pretty good pace, and ran for a respectable distance. It was probably the least picturesque running site, but the lack of amazing scenery meant that we just kept running...which is sort of the point. We had limited time to run that morning, as Bruce had to go straight from running five and a half miles to a Crossfit class and I had 12 hours of driving ahead of me that day. The distance was only moderate, but we went hard enough that I was pretty wiped by the end. 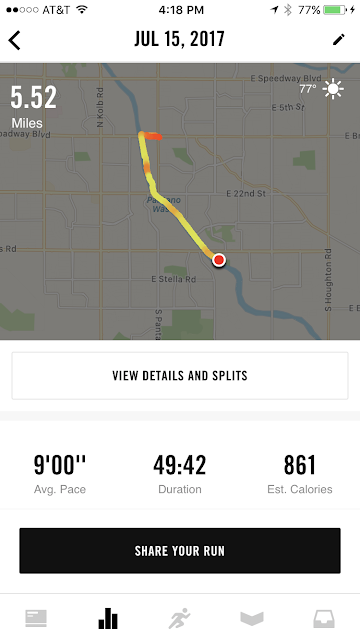