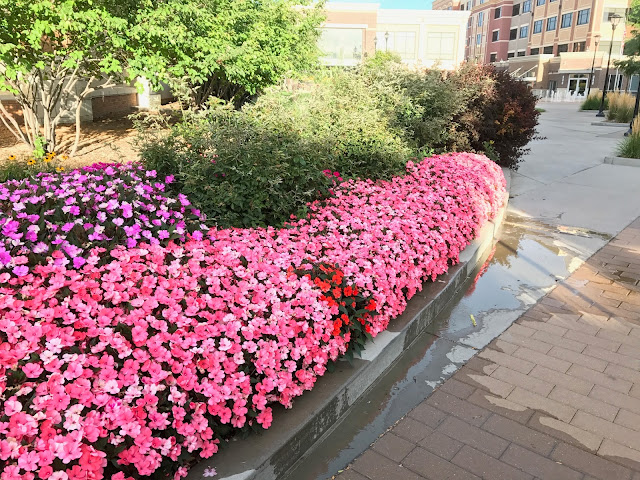 August 24, 2017
7.21 Miles in 1:07:23
Mood: Competitive second half after a lackadaisical first half.
Soundtrack: Modest Mouse "Strangers to Ourselves" and "The Moon & Antarctica"

My wife pointed out that although on my last post I mentioned orange flowers in a sea of pink ones, I put a photo of a close up of pink flowers. If I'm going to make such a big deal of gardeners doing weird flower arrangements, I should probably post photo proof...so today I ran past the same section of pink with one segment of orange and took a picture of it so that anyone reading this blog can have ample photographic evidence of just how silly it all is.

I was in a hurry this morning, as I needed to get to work earlier than usual, but I still managed to get in a solid distance as I pushed myself pretty hard. It's funny how having a deadline makes it easier to get in at a reasonable time in the morning. I also had motivation with my speeds, or at least I did after about three and a half miles into this run. For the first three plus miles I was jogging along at a modest 9:36 per mile...not my slowest pace, but definitely not as fast as I can go. Suddenly a guy in green shorts blew past me and I was suddenly motivated to not get left in the dust. I managed to keep pace with him for a mile plus, and if you look at my splits, the first three miles all hovered at around 9:36, but my fourth mile was completed in a blistering (for me) 8:29. Yup, I cut a minute and seven seconds off my pace in one mile all because a guy passed me on the trail. I managed to keep my speeds at a decent pace the rest of the way and coasted into the finish with a respectable 9:21 average...made all the more amazing to me because of how slow I was for the entire first half of the run. It's funny how a tiny bit of perceived competition can make such a huge difference in results. 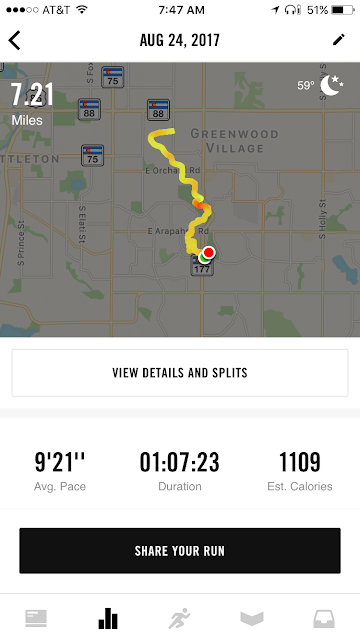