I was hesitant to leave for my run this morning. In truth, I almost just didn't get out of bed and slept in instead. I wish I had done that, now. I forced myself out of bed and decided to head out despite not feeling quite 100%. My legs were a bit tired and I just wasn't feeling it. I walked from home towards the Streets of Southglenn and as I crossed University, I began jogging as I crossed the street.

This run officially was clocked at 59 seconds, but it truth, it probably only lasted 20. Right after crossing the street I began running down the sidewalk and almost immediately tripped on the jagged sidewalk and banged hard against the ground. I hit really hard. I stood up a bit confused from pain, and I got a little dizzy and my sight went black. It hurt a lot and for about 15 seconds I couldn't see. My vision cleared and I hobbled over to the mall area. I was determined to try and walk it off, but I was hurting too much, bleeding too much (as you can see in the photo), and just realized that perhaps this was God's way of telling me I really shouldn't run today.

I went home, cleaned and bandaged the wound, and decided to just chill on the running front for the rest of the day. I feel just fine, now. My knee is a little sore, but I'm hoping that all goes well and I'll be ready to do a slightly longer run on Sunday morning. And that is the story of how I came to post what the shortest run in the history of the blog. May it be a record that is never broken. 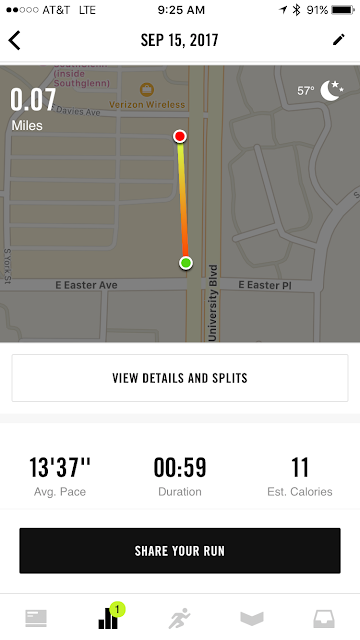