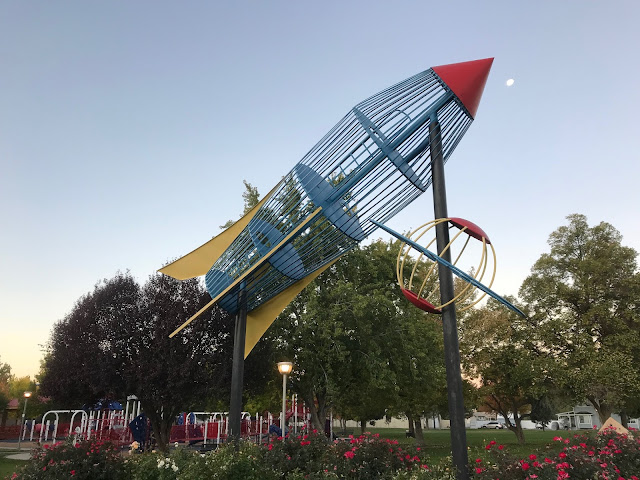 The family took a mini-vacation this weekend, so I awoke to find my Sunday morning running opportunity in suburban Grand Junction, Colorado. I didn't really have any idea what I would find, but I set out moving south at 6AM to see what I could see.

As I often do when I'm running in an unfamiliar place, I used Pokemon Gyms as an interesting site locator, as the gyms are usually placed in areas where more compelling local landmarks can be found. Using that method, I quickly found Rocket Park. It was still dark when I first arrived, and I could see the rocket pictured above, but it was very dark so I couldn't get a great view of it. I couldn't make out any colors, but I had a picture in my mind of what I was looking at based on my childhood.

When I was a kid, we had a rocket just like this in a park that I would frequent. It had a slide coming off the third level and it was just as awesome as it was dangerous. This was the 80's and apparently no one sued municipalities for putting death traps in reach of children in those days, so we happily climbed all over this thing, and the more daring/stupid of us would climb around on the outside of the rocket, as it was rather easily accessible. Seeing as how America has become more litigious and less inclined to provide precarious play opportunities to children, this is no longer available as a play structure.

In the park I grew up, the rocket was taken away, which just stinks. Grand Junction had a much better method to deal with retiring this equipment. Instead of having it hauled away as scrap, they posted it up on a pole as a park decoration and literally renamed the park "Rocket Park". I happily had all sorts of nostalgia flowing as I passed this place. As soon as I saw it, I knew it'd be the photo for this run, even though that meant that I'd have to adjust my run to arrive back at this park when the sun had risen high enough to provide light for a photo.

The rest of my run took me through nice neighborhoods, a terrible rocky path along a human built stream, a busy thoroughfare, and a trailer park. Grand Junction has some seriously diverse places built right next to each other.

However, the goofiest thing about Grand Junction is how many fractions can be found on their streets. I spent a good portion of my run speeding along 28 1/4 road. Also, my aunt's house has a street number of 578 1/2. Her full address has not one but two fractions in it. It's ridiculous. The concept is that each road number is exactly a mile from each other. I guess they use it to more efficiently grid the city. Perhaps that is a good idea in theory, but in practice it leaves a lot to be desired, which is a euphemistic way of saying it's dumb. But they do have Rocket Park, so I forgive them. 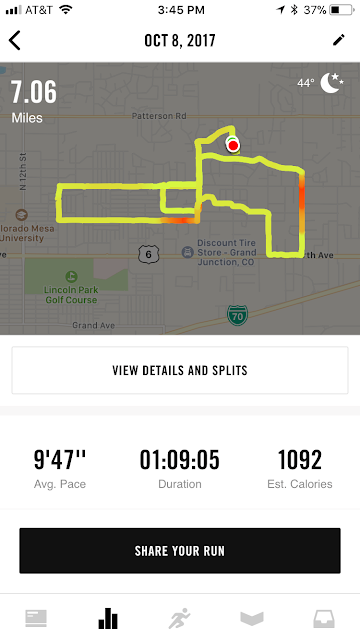