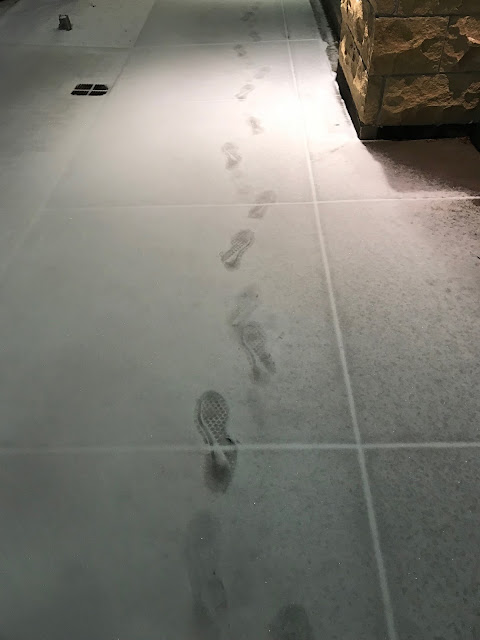 December 21, 2017
7.43 Miles in 1:20:47
Mood: It is most certainly NOT the most wonderful time of the year.
Soundtrack: Andrew McMahon in the Wilderness "Zombies on Broadway" / Lord Huron "Lonesome Dreams" / Kanye West "My Beautiful Dark Twisted Fantasy"

The forecast called for snow, and when I woke up, I was giving significant thought to just sleeping in and skipping out on my Thursday run altogether. However, as I went to porch to survey just how much of the nasty white menace had fell from the sky, I was amazed and pleased to see that literally NOTHING had fallen. The porch was still dry. With renewed enthusiasm I ate breakfast and then hopped into all my workout wear, and twenty five minutes later I was ready to head out. I opened the door, and in that brief period of less than half an hour, the world had turned harshly white. Not only had it already snowed a bunch, it was falling with vigor.

Since I was ready to go, I pulled up my hood and with less than my most enthusiastic energy, I headed out into the storm. I quickly determined that I was going to stay very close to home in case the storm severity reached the point where I needed to get home quick. I ran to Southglenn and began just running in a half mile rectangle around the shopping center. The photo above shows what I was looking at for most of the run...just my quickly disappearing footsteps from previous laps as they were in the process of being buried in the snow.

It wasn't a fun run, it wasn't a fast run, it wasn't a comfortable run, and I daresay I didn't really enjoy myself all that much. Still, I got in over seven miles towards my goal, and things can't always be ideal. The important thing is that I finished. Ugh. Have I mentioned I hate winter? 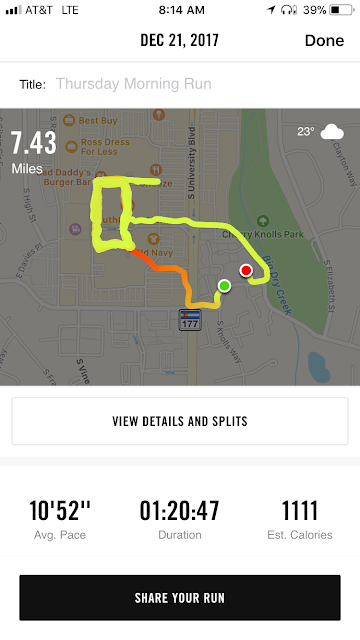