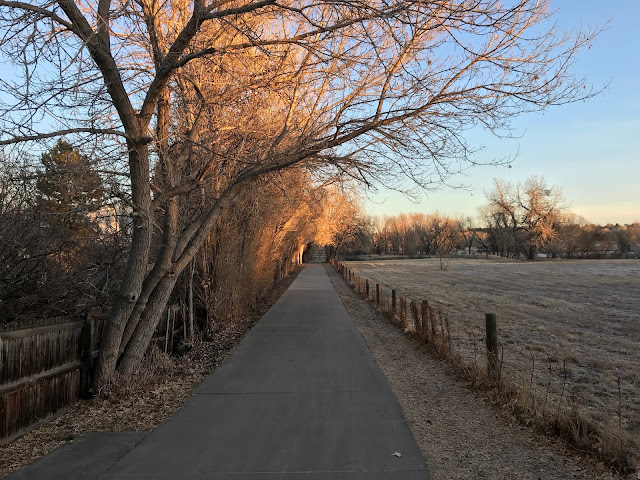 My original plan was to circle Bible Park several time, as it is home to a Wailmer nest, and that is a Pokemon I enjoy, and I've been around Bible Park enough times to know it's a solid running locale. However, after my first loop around the park, I discovered that it connects to the Highline Canal Trail, and suddenly the plan became to connect to the Canal trail and see portions of it that I've never run on before, as I was significantly North and East of my usual section of the trail.

This portion is inferior to my normal section, as it is almost all paved. In fact, I think I may have found the least beautiful portion of the entire 70 mile trail, as most of the time as I was running I was on a paved trail that was in the midst of uninspiring apartment complexes and only augmented by a few uninspiring trees. However, at the very end of my exploration of this section of the Highline, I found a section where it intersects with the Cherry Creek Trail, and there were some beautiful views and nice areas right along the creek which redeemed the run.

It was nice getting to see new sections (even if they aren't the best sections) of my favorite trail, and in general, this was a pretty great feeling run. It was made even better by the fact that it was a Sunday morning, and I knew I didn't have to go to work the next day because of Martin Luther King Day. Plus, there was Ellie's Birthday Party to look forward to, as well as a stay at Great Wolf Lodge later that day which was also to celebrate my daughter turning 13, so I was in a great mood that morning. 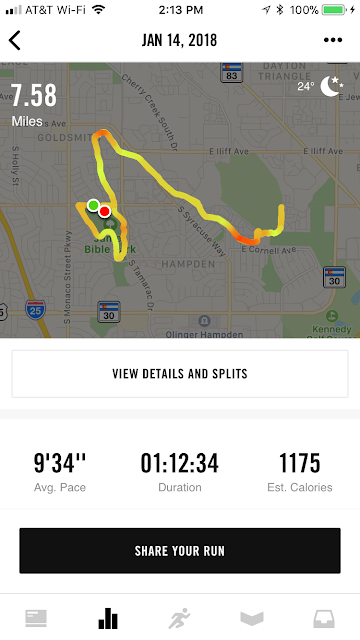