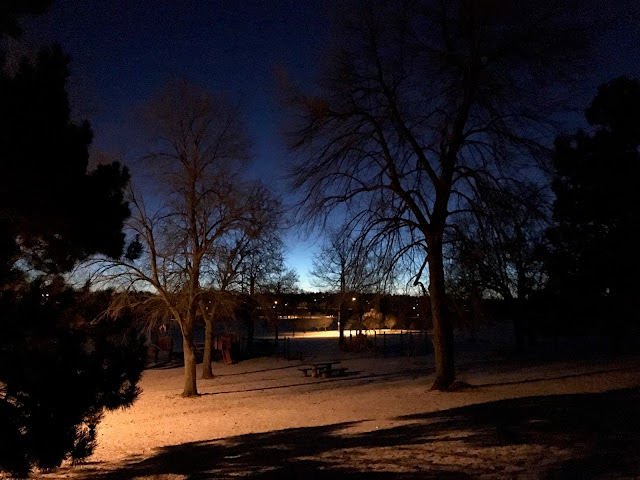 My mother-in-law had been in town for Ellie's birthday weekend, and her flight was uncomfortably early in the morning. This created a situation where my running plan became intertwined with an airport trip. I awoke at 3:30 in the morning to take her to DIA, and then drove somewhat near my work with a backpack full of clothes to change into and bathroom supplies so that I could go immediately to work and shower and change there before beginning my working day.

This meant that I was running in areas I was less familiar with, and doing so much earlier in the morning. Thanks to a January snowstorm that had fallen the day before and a bitter cold snap that night, it meant that this run was going to be slippery and freezing.

Thankfully, I had bundled up significantly, so I was dressed warm enough for the chill. However, the slipperiness of the even are what led to my ridiculously slow pace. For very large stretches of this run, I had to go slow and run like a ninny so that I didn't fall and kill myself on black ice. It didn't help that it was dark for most of the run, so my vision of the unfamiliar paths I was treading were difficult to perceive. It was a tough run.

I started at Wallace Park, and the first ten minutes were brutally cold. I debated if this whole endeavor was a fool's errand, but then I warmed up enough to get into it. I headed North, and my plan was to make it back to Bible Park for the second straight run and then come back. I had figured in my head that the trip would be about a seven mile run, and I would have been correct if Bible Park wasn't a bit of a trap. If you look at the map, there are three bridges which provide  exits to the park on the East, South and West sides. I knew from my Sunday run that the bridge on the South side was under construction, but I figured I could still use the West bridge to escape the Park and get headed back to Wallace Park. However, as I ran, I discovered that the City of Denver is simultaneously rebuilding all three bridges, so the only exit possible from the park at this time is on the North side of the park. This meant that after I had run along the east side of the park to the very North end then all the way to the South End of the Park, I had to run all the way back to the North End to get out. This added a good mile and a half to my run, and extended my stay in the freezing cold. I'd be annoyed about this, but by this time, I was kind of enjoying discovering new routes that I've never before tread, so I wasn't that bummed out by being forced to spend more time in Bible Park.

When I finally got back to the car, I rushed to work where I took a very long warm shower which felt QUITE amazing, and by the time I started working at 8:30 in the morning, I had already been awake for over five hours, which is sorta insane. I started this run so early in the morning that the photo above was taken about halfway through my run, and the light is only barely starting to break on the park. It was a cold and dark run, and I pretty much enjoyed almost all of it. (Apart from that horrifically chilly first 10 minutes.) 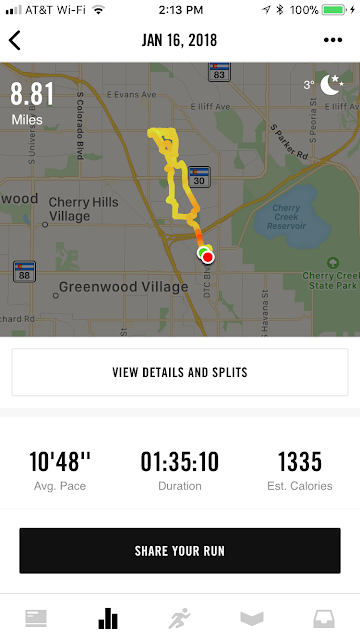