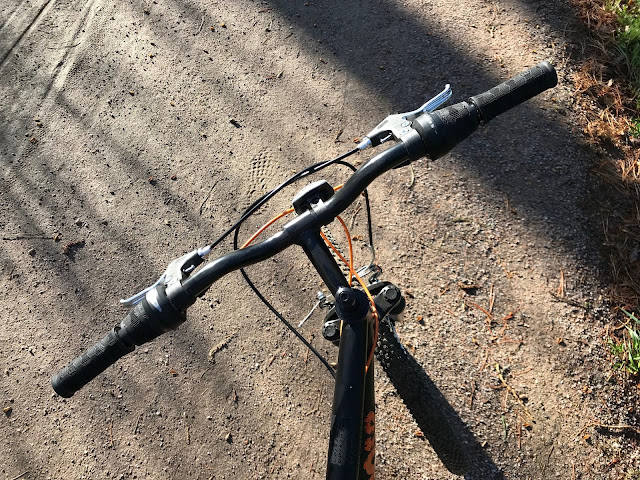 Well...I'm in a walking boot. At least most of the time I am. The doctor believes I have a stress fracture in my foot. (We couldn't get a firm diagnosis because X-rays often have a hard time picking up these types of injuries, but all the evidence points to stress fracture.) This means that I cannot run for a while. I'm aiming to be back running by June, but we will see how the healing proceeds. In the meantime, I'm not going to just sit around and be lazy, so I pulled out my bike and hit the trails this morning.

I may have to rename this blog "Ride and Shoot" or at least recognize this (hopefully brief) era as the Ride and Shoot era beginning with post 804.

Biking is a different animal than running, and I learned just how much different this morning. I did not come close to sweating nearly as much as I do when out on a run. I felt almost dry when I got home. However, I clearly used different muscles, as my legs felt like wobbly jello when I dismounted my bike to walk inside. It might be beneficial to pump up the tires of my bike, as it felt like I was riding through mud a lot. (To be fair, with all the rain and snow from yesterday, there were a good many sections that actually WERE me biking through mud, but even when the ground was dry, the flat tires made the going tough.)

The biggest issue that I was NOT a fan of was the fact that when I arrived home my two feet felt like bricks of ice. When running, your feet stay warm, as you're using them a ton. On a bike, they just hang out on the pedals and get cold. (It was chilly this morning, but thankfully we are heading out of the cold wintry season and into warmer temps, so hopefully the frozen feet of this morning will be a biking aberration.)

I was using Endomondo to track my distance, as the Nike Running App logically doesn't cover bikes. It has been awhile since I used Endomondo, and in a very Craig move, I went a good section, perhaps as much as a mile or two while the app was paused, so I definitely biked further than 11.12 Miles, but I only report the miles that actually get tracked, so hopefully I'll do better next time.

The final thing of note is that a bike is less comfortable than just being on your feet. Your feet turn into ice bricks, your hands get weird lines in them from holding the handlebars, your wrists can get aggrevated from the weird angle of holding those handlebars, even my elbow felt weird. Worst of all, my butt has been sore all day since I finished, as bike seats are notoriously non-comfortable. I'm griping a lot, but honestly, I'm super thankful that I have a way of getting out into the world and exercising that will still allow my heel to heal. Although I have some uncomfortable side effects from using the bike, I am extremely grateful to have had a chance to get out there and ride. I am hoping that I'll get better at this whole thing and more adapted to bike riding as I continue to give it a shot. 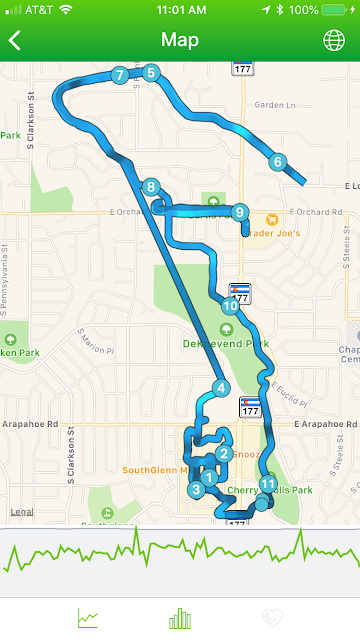