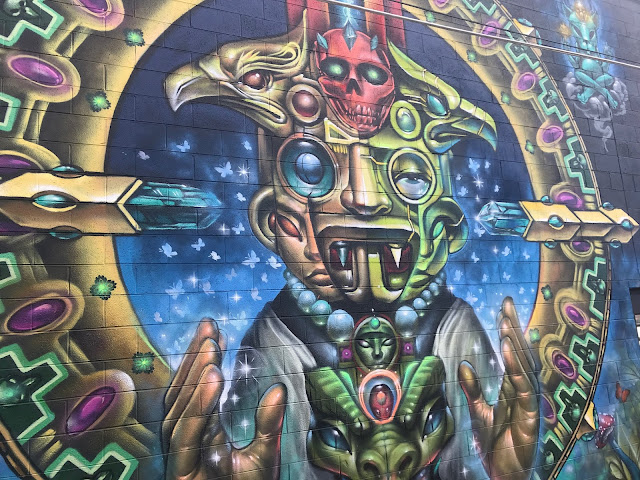 I had the day off, the kids were at school, and I had a plan. I was going to ride up to the RiNo district to look at the spray paint murals that change there on a somewhat frequent basis. This is a very long ride, but I had a lot of time, and as I left, the weather was gloriously warm for a December day. (Technically, the shortest day of the year.)

I had a slight headache as I pulled away from home, and I gave a split second of thought towards going back into the house and taking some ibuprofen, but I decided it wouldn't be necessary, and I plowed forward towards downtown. A few miles in, and my headache was not really subsiding, and I didn't feel all that great, but I was not diverting from the plan. I kept cycling northward despite the uncomfortable feelings.

I actually briefly felt pretty good as I was tooling around downtown Denver. I saw the murals (including the one pictured above) and they were pretty awesome. I also saw a statue on a rooftop of a T-Rex eating Mickey Mouse. This brief section downtown was pretty great...apart for the time when I tried riding my bike through the 16th Street Mall, which was jam packed with pedestrians and was excruciatingly slow going.

My headache returned with a vengeance once I hit the Cherry Creek Trail. Add to that a feeling that my blood sugar was starting to get low, and I was a bit of a mess. Knowing I pretty much just needed to keep moving forward, despite being about ten or so miles from home, I just put my head down and kept moving. At one point I was passed by an elderly couple on a bicycle built for two, which was not great for my ego, but I didn't care much at that point. I was tired and hurting and I just focused on continuing to move.

Things got better as I got closer to Wash Park. I found a convenience store, and briefly ran in to get a Powerade and a bag of chips. After buying those, I also bought four ibuprofen tablets for two bucks, which is an obscene overcharging, but I happily paid it to help with the headache. I had stopped partially because I was hungry and partially because I needed something to raise my blood sugar. I stood outside the store and ate my chips and guzzled the Powerade as the pills slowly began to do their work. By the time I reached I-25 and Downing, my headache was feeling much better and my brother called me to let me know that our Broncos season tickets had been selected to allow us to go down to the field and help unfurl the giant American flag before kickoff. This would have been awesome if I was going to the game, but we had sold our tickets, so it was more of a thing that could have been awesome, but wasn't.

I then just through sheer determination made it the rest of the way home. Going south at that point is largely an uphill endeavor, and there were a couple of times on University that I walked my bike up a hill because I was tired. It was about at this point that I noticed that the audio updates that announce every mile tracked on my Endomondo app stopped occurring. I was too tired to care too much about it, but when I got home, I realized that I had been shorted several miles because for whatever unknown reason, the app just stopped working. So in truth, I definitely went over 30 miles and this may have been my longest ride ever, I only got tracking credit for 29 miles. This is not a big deal, but it annoys me.

Still, I survived, and got home and rested for the rest of the day, so all in all, it was a win...even if it was definitely not  the most fun ride I have ever had. 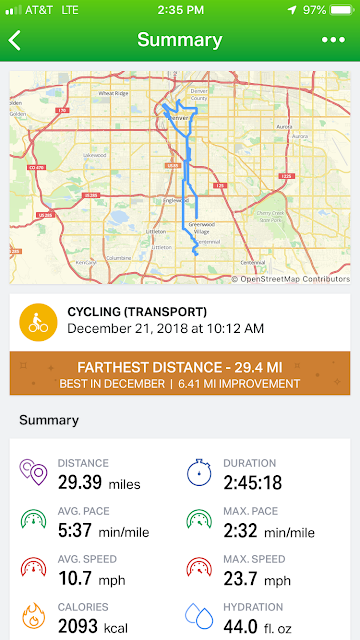 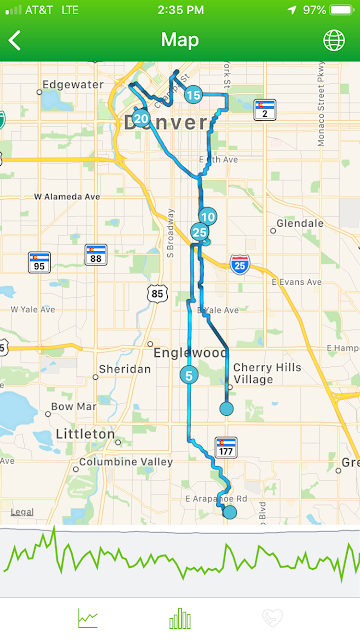