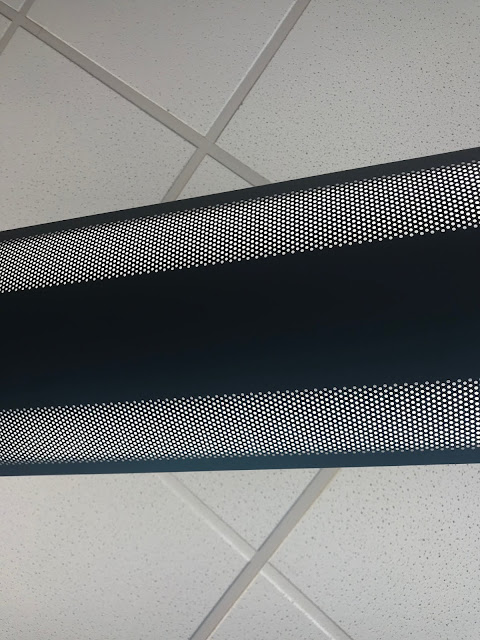 It was six degrees outside this morning. I prefer to not die of hypothermia, so I drove to the rec center to run circles on a track. Track running is a little boring, but it still beats a treadmill, plus I get to become part of the rec center track ecosystem which is interesting. It mostly consists of elderly people walking around the track, although there was younger guy who was faster than me running around for the first half of my run...he quit after about 2 miles, so I say I won.

I forgot to take a picture at the rec center to use for this run, so this photo is a picture of the ceiling at my work the same day as my run. It seemed sufficiently boring to express just how dull running around in a tenth of a mile circle can be. Speaking of which, this track is a tenth of a mile, and I counted very specifically that I ran 50 laps, so my distance should be 5 miles, and yet I only registered 4.21. I chalk that up to GPS struggling when you're not running in straight lines, but rather tight circles. At least my map looks cool.

There are some interesting things about running the track, which include the little room just off the track where older people do their stretching classes. I think it might be pilates. I'm not sure, but that would be my guess. It's fun to watch them exercise as I fly past their room, and their body heat makes that one little section of the track much warmer than the rest which is honestly a little chilly. Also, a great thing about running on a track in February is that I was able to run in shorts, which is something I won't get to do outdoors until late April or early May. 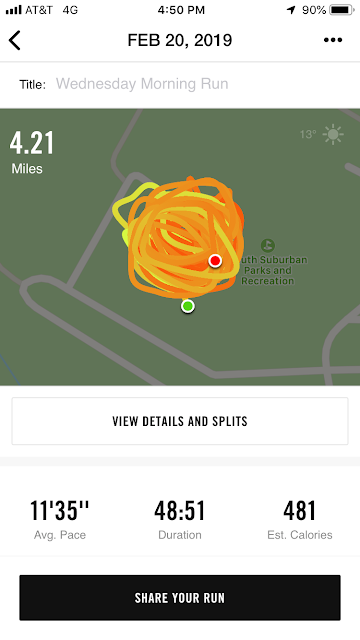